Release to the Pasture 2010 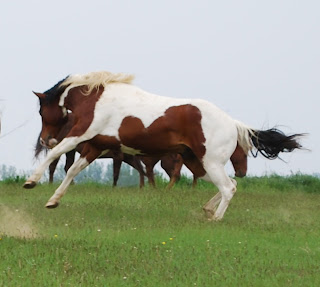 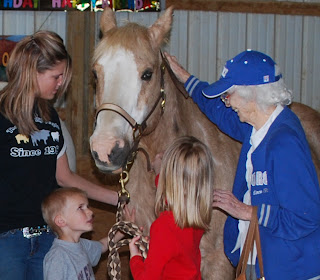 Hazel Schjodt (the young gal in the ball cap) recently made a donation in memory of Melvin Waswick. She wants it to help all of the horses here, so we will use it to buy hay later this year. Thanks Hazel!
here's another update on Hero's riding training. 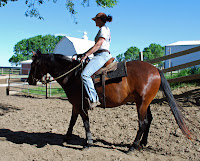 Posted by gentlereins at 2:30 PM

use this link for an update. 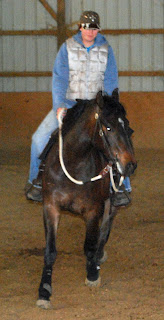 Posted by gentlereins at 9:18 AM

That's about all I know, but I think we can go with the relief that "our Aspen" is being represented!
Posted by gentlereins at 1:37 PM 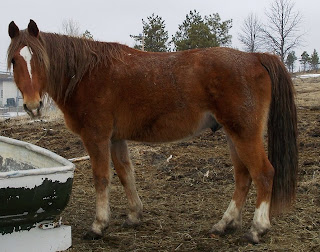 Sprocket is a 20ish something Missouri Fox Trotter who loyally served our federal government for a number of years, going where vehicles could not go.
He now needs and so greatly deserves a special retirement home.
As a companion animal only. He has a lameness issue and should not be ridden.
Sorry, I know. but if he didn't have a lameness issue I guess he'd still be workin'.
If you are interested in letting Sprocket retire at your place, please call or email. Thanks
605 359-0961 or doublehphorses@alliancecom.net
Posted by gentlereins at 1:51 PM

updates on Aspen, ideas submitted to the State Vet

This post written by Darci Hortness, NOT necessarily the opinions of  all DoubleHP Volunteers, Sponsors, or Directors.

Today is the day there is/was to be a dispositional conference in the Apsen case. Though I am not even sure if Aspen is being represented in the case. The states attorney's office would not respond to my questions regarding that. Someone from their office did, however, tell me that my information had been placed in the file and would be considered. I do not know anymore than that.

Tuesday (I think) there was a meeting in Pierre, an "animal care law review" or "animal care review" meeting. I had asked a long time ago to be included, but I was not. I was never informed one way or another. But I heard from another animal welfare person who had asked to be included and also was not. I have asked the State Vet for a list of all the people who were invited, and a brief explanation of why they were included. (such as what segment of animal care or law each person represents or has expertise in). I also asked who decided who would be invited. I have not received the list. I have asked twice. It is possible it is being sent to me through USPS I suppose. But since I was not at the meeting, I sent the State Vet a lengthy email that includes some of my ideas and opinions.

(I didn't receive an invite to the meeting, but I did receive a reminder from the State Vet that all livestock care complaints need to go to the Animal Industry Board. So I kind of addressed that in my email of ideas too).

Perhaps if the results were better, if the AIB rep. recognized when there are emaciated horses standing around with no food, bcs of 1 or 2, dead young horses lying around, and others lying there suffering too weak to get up, perhaps if that at least could be considered an emergency, and that the horses would get immediate help, that it was agreed that the horses needed and deserved help, that it is ok to save lives even if they are just horses. Perhaps if the general public could have confidence that the AIB actually cares about the horses, feels bad for them when they are suffering, and truly wants to get the horses rescued and enforce the laws that we do have written. Perhaps then everyone including sheriffs, humane officers, horse rescue humane societies, and the general public will feel that their report will actually help the horses. Most people don’t really care if the neglectful owners go to jail for these crimes. But they do want the horses to be helped. And they do want the neglectful owners to be charged and if convicted they want them to be held accountable and have to pay vet bills, restitution, fines, etc. And in the case of Larry Pahl, that is an extremely severe case, there is no reason for this person to own horses. I understand there is a dispositional conference in this case in Minnehaha County tomorrow. It would be nice if you called the states attorney and told him you think this guy needs to be punished to the fullest,and that they should recommend to the judge that this guy should not own horses. He obviously doesn’t know how to or is unable to care for them. I have already sent my photos of the horse that (the Vet) euthanized after I found it and called (the Vet). Since no one ever asked me for my evidence. And I was the only one with enough sense to take pictures that night. Jan. 19. I don’t even know if he’s being charged for that horse, and that horse was suffering as much as a horse can suffer. On Larry Pahl’s first court appearance, where he stated that he didn’t understand his charges and that he has owned horses all of his life, the Judge mentioned that he was being charged with 1 count of inhumane treatment and mentioned a Belgian mare. So I don’t even know if the little buckskin that I found is mentioned. I believe that 9 or 10 horses died at that property since last winter, most of them babies that Larry Pahl owned. I saw 3 the night I was there. And there was a lot of snow cover so I know I didn’t see them all. It would help if the AIB would actually WANT to make an example of some of these irresponsible horse owners. I doubt that farmers and ranchers would be mad at you. I lived out West River for a couple of years... and I never saw the ranchers’ horses treated like these horses were. I think most ranchers would be as sick about it as I was. I don’t know how you think neglect is ever going to decrease, if the only message that goes out is that it’s ok in South Dakota to treat horses like this. Like garbage. I have had one AIB person compare horses to dirt, and another compare them to garbage. I have seen several groups of horses where some are dead and/or emaciated and living in such unsafe conditions, that the AIB has checked on. And done nothing to help the horses.


I think if you want to take a big step toward progress, you should start making some immediate & aggressive moves in cases where there are dead and dying horses, others emaciated with no food, and most of them young. Especially when there is reproduction going on.

I think everyone: AIB, ag. Departments and associations, equine educators, trainers, breeders, farriers, veterinarians, owners, salebarns, breed associations, show assn, cattle ranchers, rescuers, FFA advisors, 4-H leaders, everyone, should stop being so afraid to mention the B word. BREEDING. Overbreeding, irresponsible breeding. If it costs a guy $2,000 to care for a mare for a year, how does he profit from selling the foal for any less? I’m not saying this is a new thing. I’ve always thought the horse industry is screwed up, financially speaking. For the people who think they are going to make a living selling colts that they raise. They just can’t get it through their minds that it takes a very special mare and a very special stallion to produce a special enough foal that, if luck is there and the baby is born healthy, there will be some profit.

I think some education on what it takes to have a successful horse breeding business would be an excellent project, and if it came from within the horse and/or ag. industry it would be well-received.

I’m rambling, you can tell, but there are a lot of things that can be done to improve the excess horse problem. And it doesn’t matter how the laws read, if the message that “it’s ok to starve horses” keeps getting sent out, and laws are not enforced and horses are not helped and neglectful owners just go about their “business” of allowing and encouraging their horses that they can’t afford to produce more horses that no one wants, if those things aren’t addressed, it doesn’t matter how the laws read. Things won’t improve if they aren’t dealt with.

We just find it hard to understand why the people who are in charge of horse laws don’t seem to even care about the horses. I know they are a lot of work, I’ve been rescuing young starving horses for 9 years. But in South Dakota, we have just never made any progress on getting a statewide, consistent system in place. Nobody really thinks these laws will be enforced, because they usually aren’t. and the only way to see fewer cases of neglect is to send out the message that this isn’t how we treat our horses in South Dakota....Horses is a way of life for me. It’s not a business, we don’t even try to make money with the horses here; but it’s not a hobby either. It is my full-time “volunteer” job... I have owned, trained, showed, rescued, adopted out, taught a lot of people about, and truly loved horses for a long time. I’ve lived west river and east river. Ridden all over in the Black Hills and been a core rider in the Buffalo roundup. I take care of the shelter horses here. I clean their pens and stalls and throw bales around and wrap their legs and know when they are cold. But I’ve never been a breeder. I understand there are responsible horse breeders. And maybe you could get together with some of them to come up with an educational program on how difficult it is to make money raising horses these days.

There, just like I was at the meeting.
Darci Hortness
Posted by gentlereins at 11:19 AM

update in Aspen case, we have made our point, we hope the legal system will re-emphasize our point that it is no longer acceptable to treat horses this way - like garbage 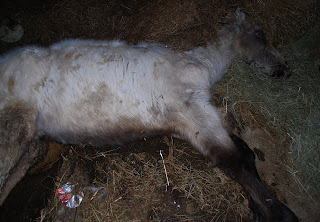 link here for the update.
http://newhopehorseshelter.blogspot.com/search/label/Aspen
Posted by gentlereins at 10:55 AM

Horsemanship To Live By 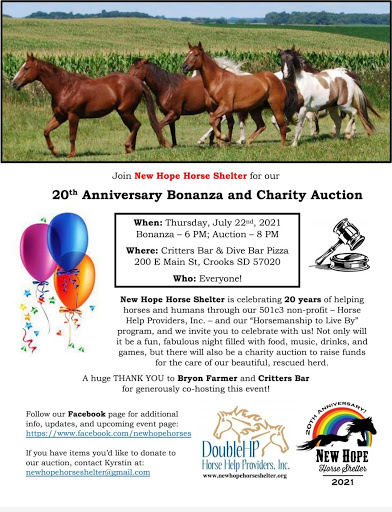