The Saturday before Easter Sunday, Greg decided that was the day to get the manure pile out of there and spread on farmer-neighbor's field.
It was all going well. Both tractors were working, which meant Greg could leave one hooked up and use the other to scoop and dump into the spreader.
It was all going well. Until. Greg said, "I just saw this little head . . ."

It was a miracle that the loader did not destroy the bunnies. It must have barely skimmed the nest. And exposed that first little bunny face. We dug around and found 5 more. You have to understand here, we dug around a lot. uh huh. in the manure. Heck, I deal with manure every day. no big deal. 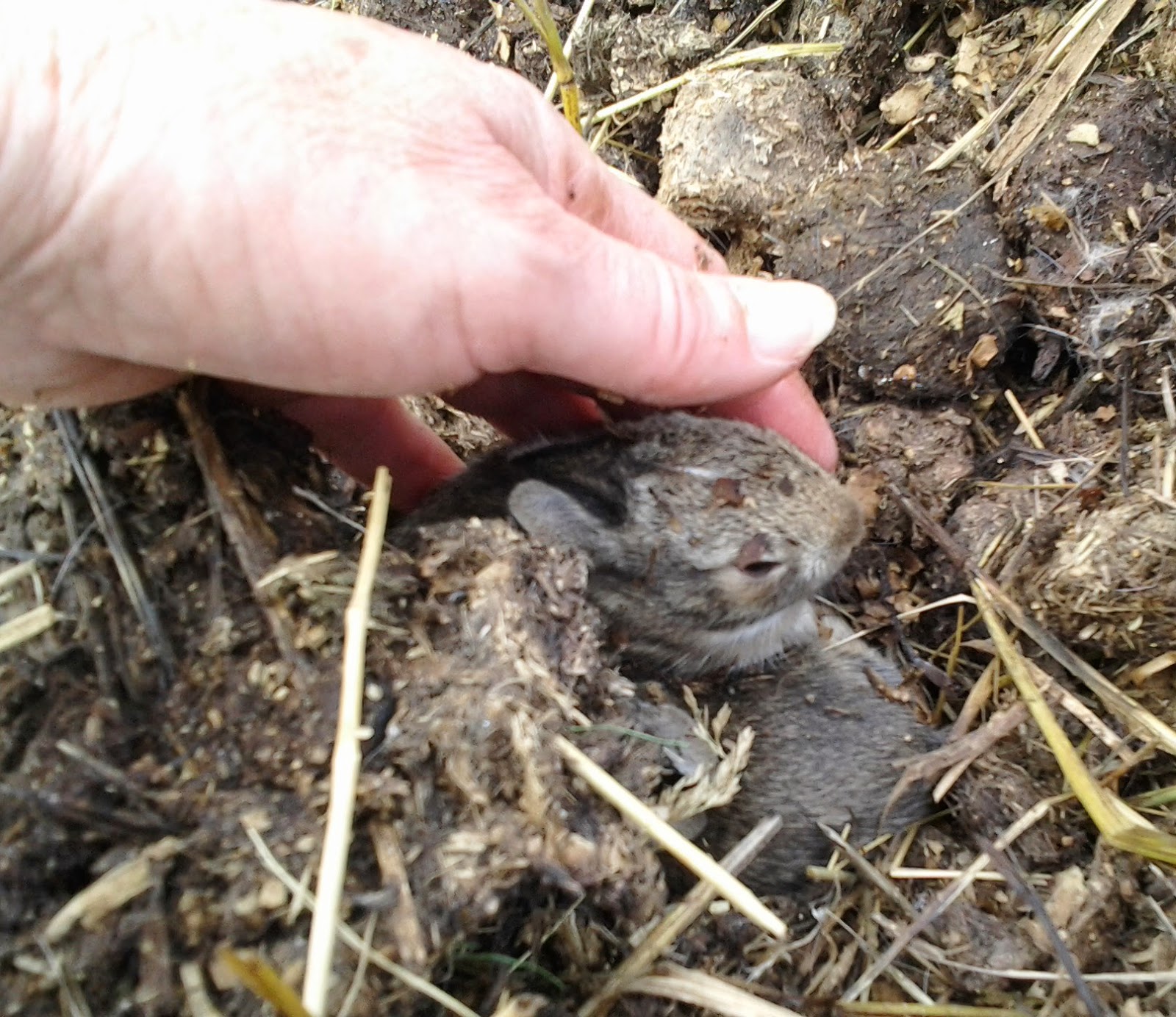 So, 6 little bunnies with a destroyed nest. I knew they had a chance, because their eyes were open. My sister, Mickie Hortness, who does wildlife rehab out in Rapid City, said this means they were at least 10 days old. And had gotten lots of good stuff from mama bunny. For a brief second I considered putting them out in the trees, imagining that mama bunny would find them and build them a new nest and everything would be happy as in Disneyland. But then I thought of all the cats who live here. And I knew these bunnies were not old enough to be on their own yet.
I also knew, from my sister's experience with hundreds of baby bunnies, that they are fragile. Many do not make it.
Still, they were uninjured, they had been with mama for at least 10 days and, thanks to the horse poop pile, they were nice and warm.

the bunnies stayed here for 2 nights. Greg and I tried to feed them. With that KMR kitty milk replacement stuff. I couldn't tell if they were getting anything in. Most of it seemed to drip down their necks. I tried a syringe, and Greg tried a little bottle with rubber nipple. My sister Mick said you gotta get their little mouths opened and squirt it in there. They don't know what it is cuz it's not like mama. But they were so little, I didn't want to hurt them. and they put their little hands up in front of their mouths too. Like they were blocking it. I was finally able to put the end of the syringe in their mouths. Their little mouths are very very strong, and I could feel their little bunny teeth too. So we put some spinach leaves and grass and stuff in the cage, just in case they tried to chew greens.
I just didn't feel like I was confident they were getting the milk they needed. And Greg's brother Steve was headed back home to Rapid City, so we sent the little bunnies with him and he delivered them to sister Mickie, the wildlife rehabber.
Today she sent me pictures. All 6 bunnies are thriving. 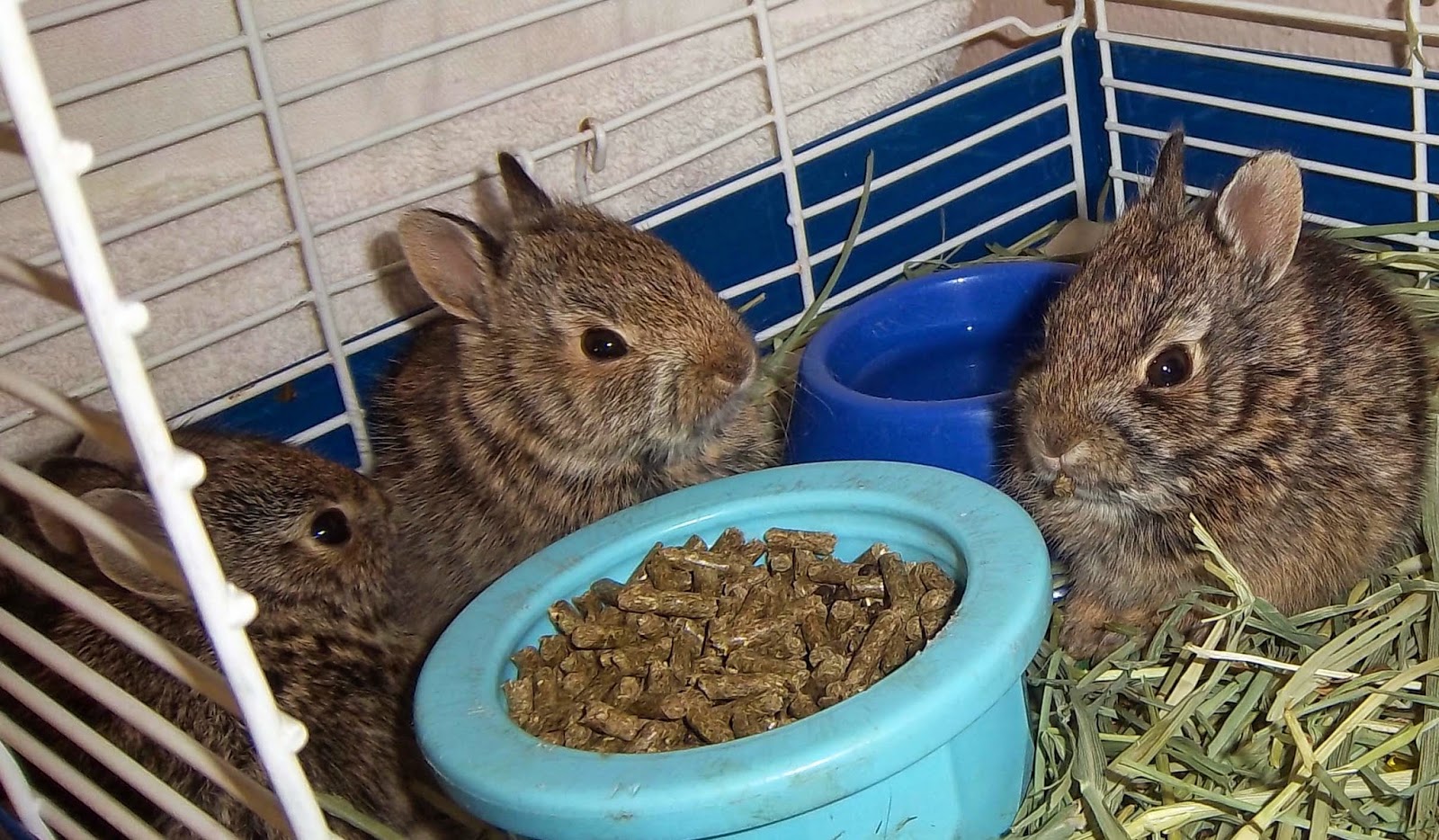 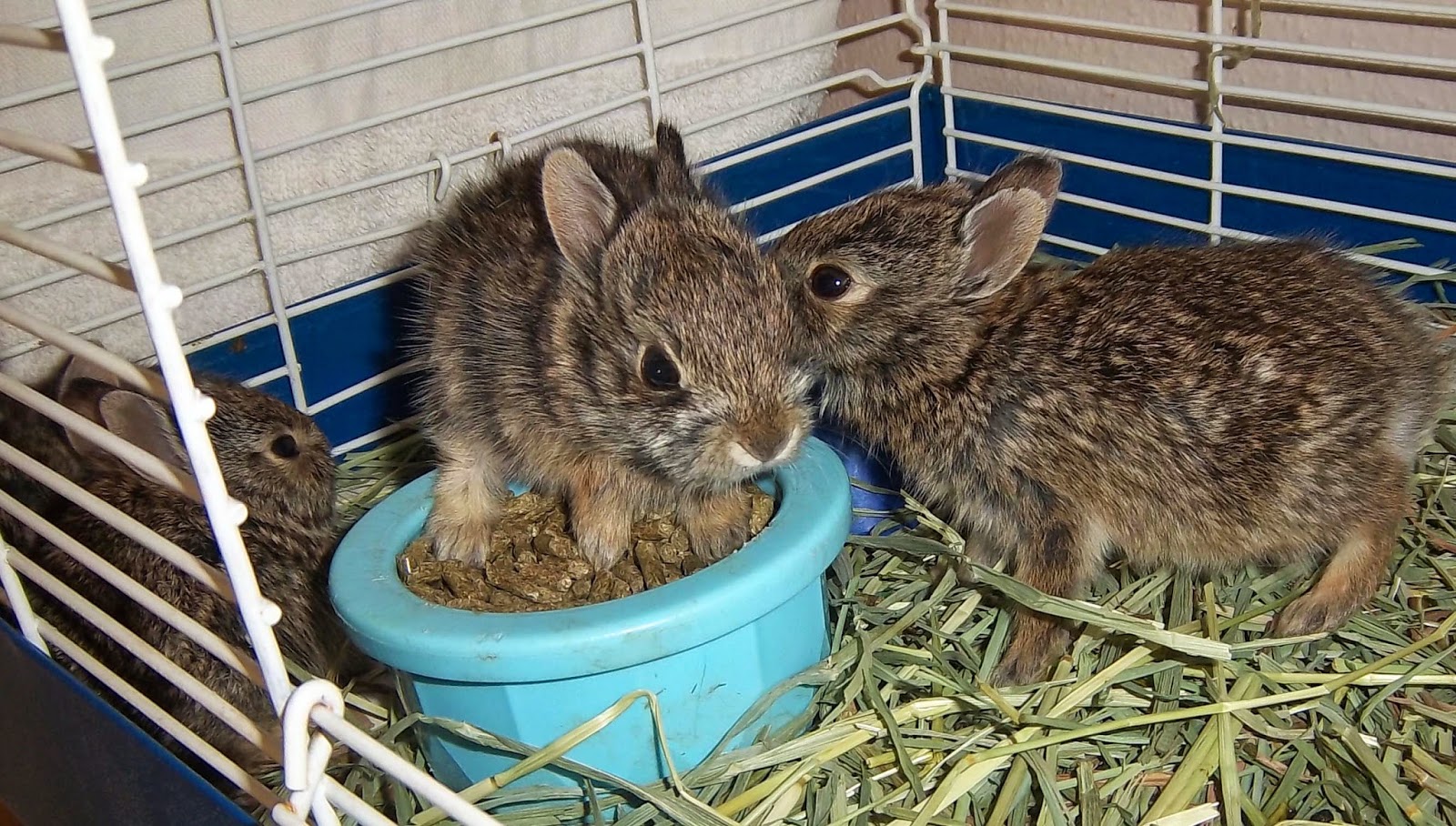 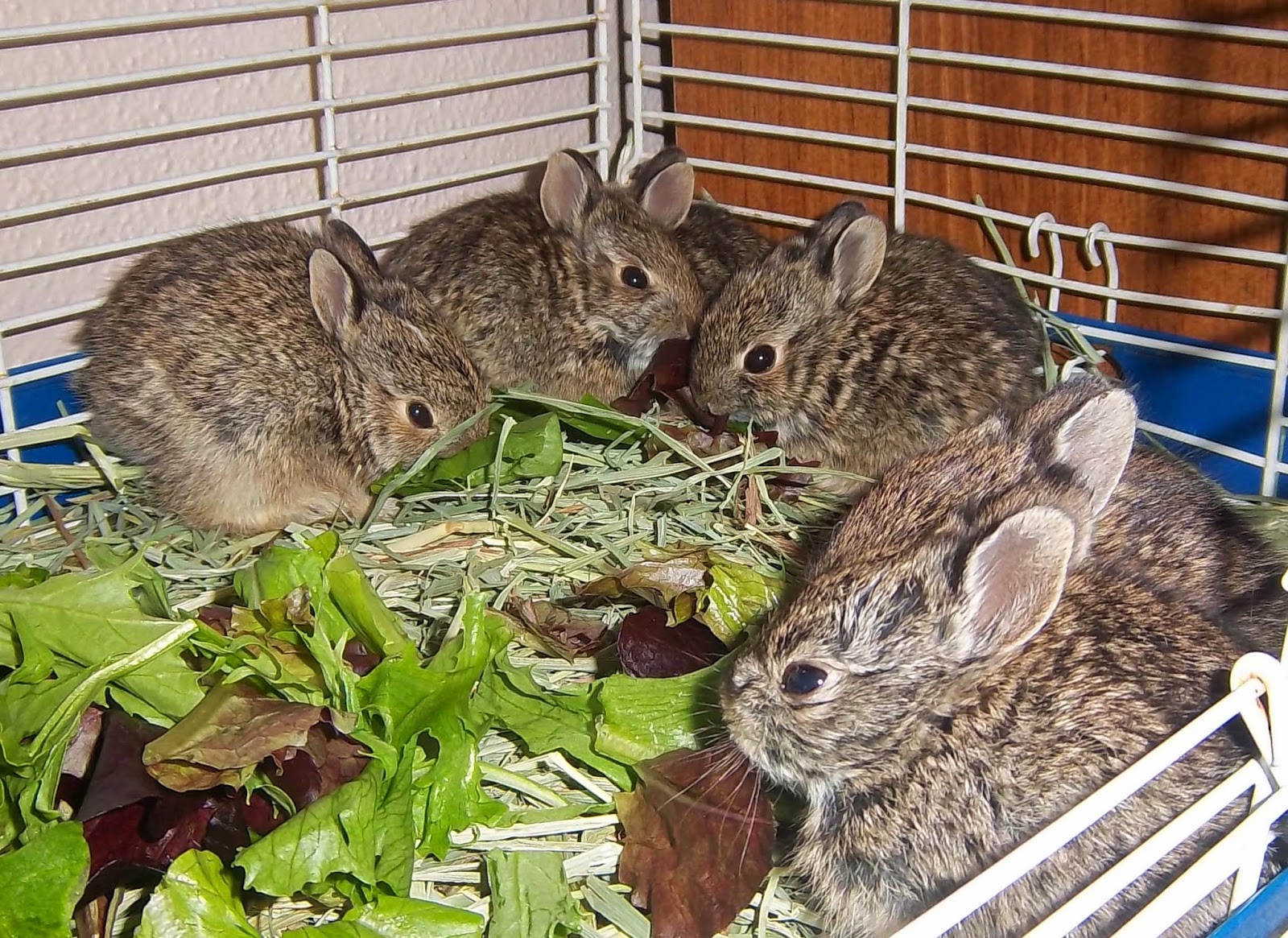 I know this seems weird to some of you. There are bunnies all over the place. I don't go looking for them. I know when you find a bunny nest to leave it be, mommy bunny will be back.
But on the top of a manure pile? Really?
Anyway, that's my 2014 Easter Bunny story. Can you top that?

oh yeah, the old tractor broke down and Greg had to do the last half with just one tractor. He had to unhook and hook back up after each load. bummer. and with all the bunny related distractions, he didn't get done until Monday. Thank you Mother Nature for 3 nice dry days in a row to get the whole manure pile hauled out.

Of course the horses helped too. 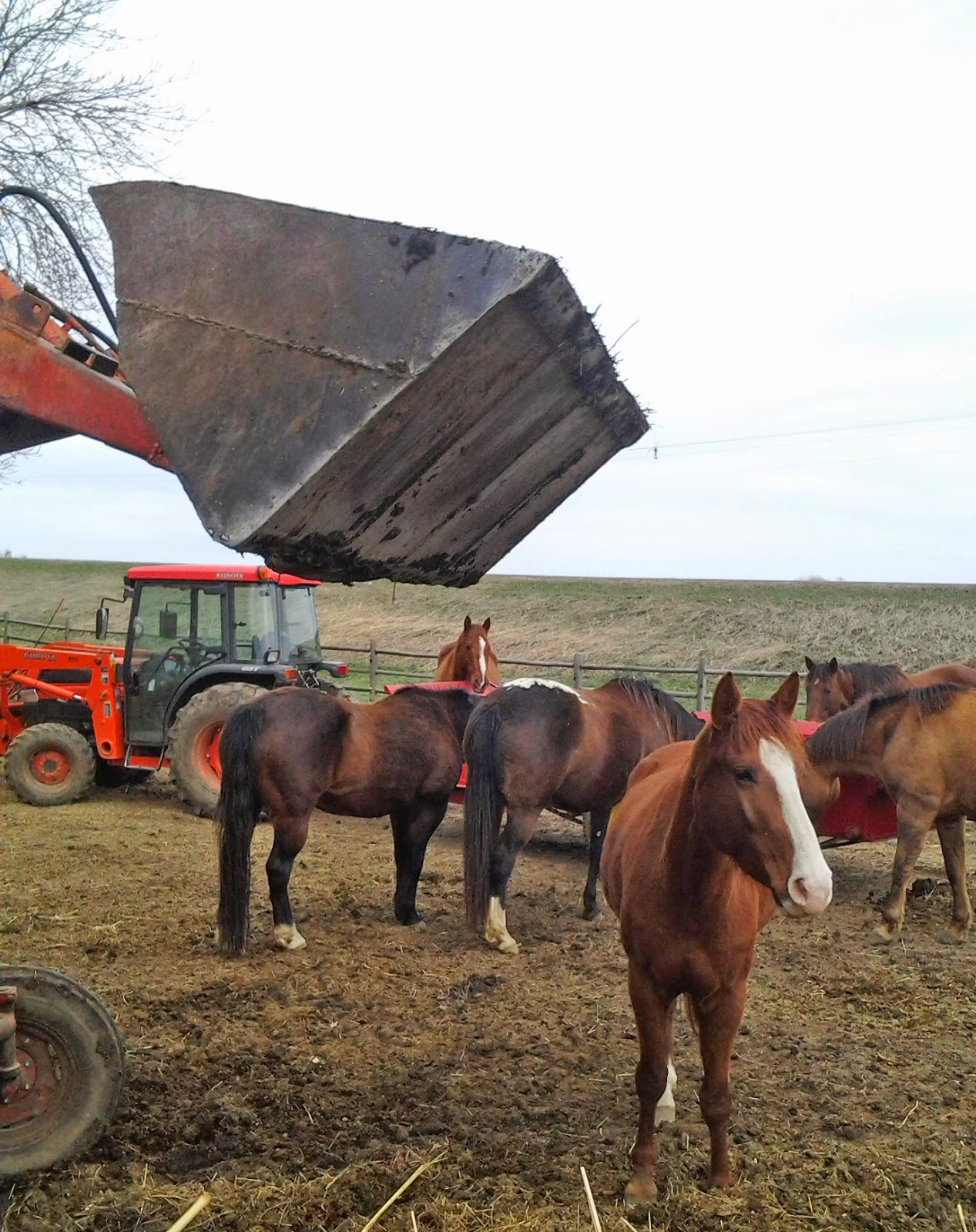 33rd reason to be in AWE - builds arm strength

Angela reminded me of this one. When she started our horsemanship program, she could barely put the saddle on. She got tired easily from doing chores. Yes she is stronger now! no trouble putting the saddle on, carrying water buckets, dumping full wheelbarrows full of manure, etc. Last year when Taryn was here, she had to buy 2 new bowling balls in a short period of time because her arms got so strong from doing horse chores and horsemanship.
Of course we could write pages and pages about how we become strong from doing chores and horsemanship. And not just physical strength.
Most of us become more assertive (either less aggressive or less timid). We learn the power of our willpower. And we learn that just because we have a lot of energy, that doesn't mean we should use it all up right away or do everything really fast or loud or big. If we can change our energy level so it is appropriate for the situation, our energy will last all day long and our accomplishments will be great. Now that is strength! And that is why our horsemanship program is called AWE (Assertiveness, Willpower, Energy).
Be in AWE! Call today. 359-0961.
Posted by gentlereins at 10:49 AM

Labels: be in AWE

32nd reason to be in AWE - nonriding and riding activities

When you are in AWE, you will learn how to communicate with your horse to do things like this! 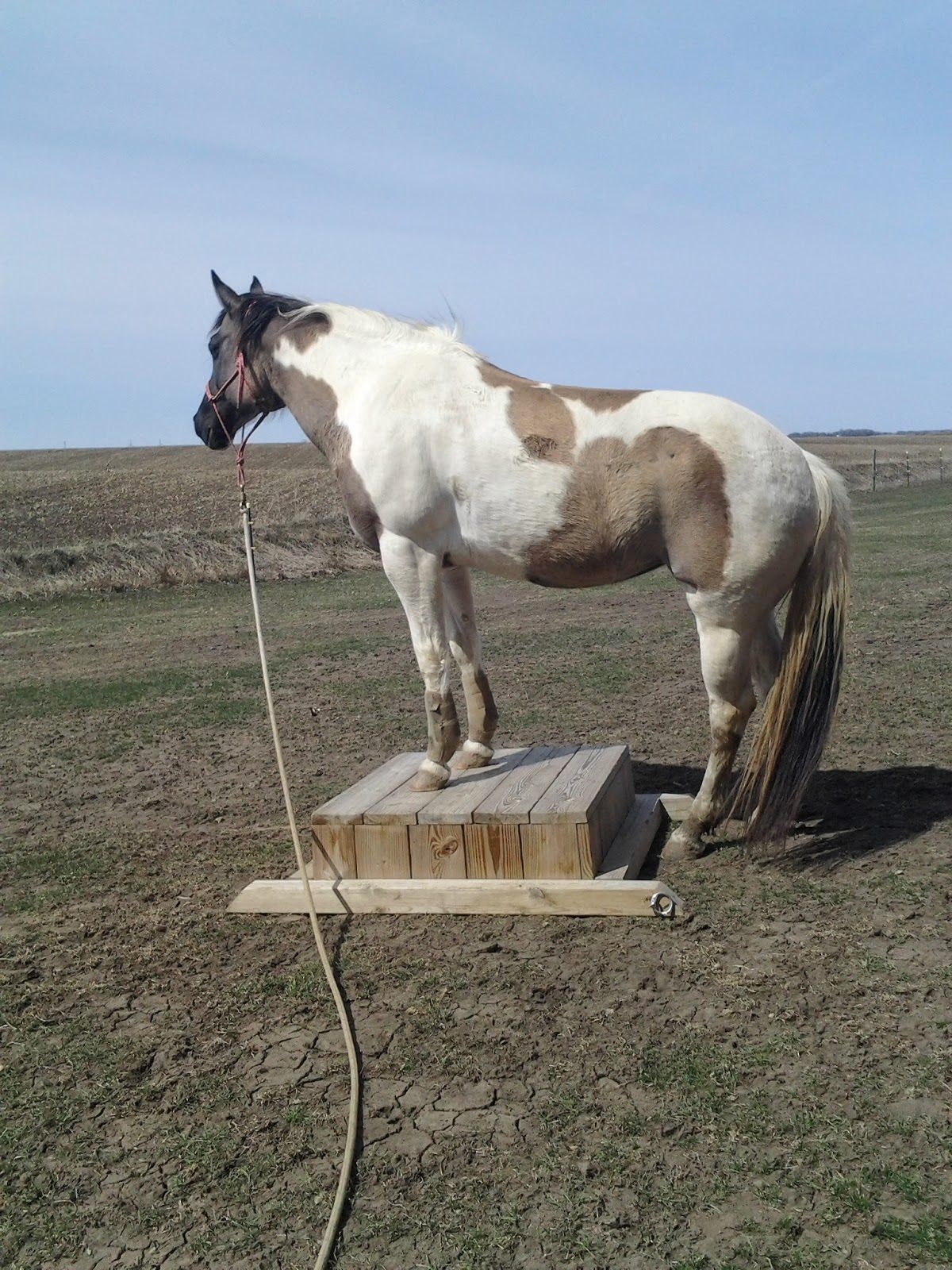 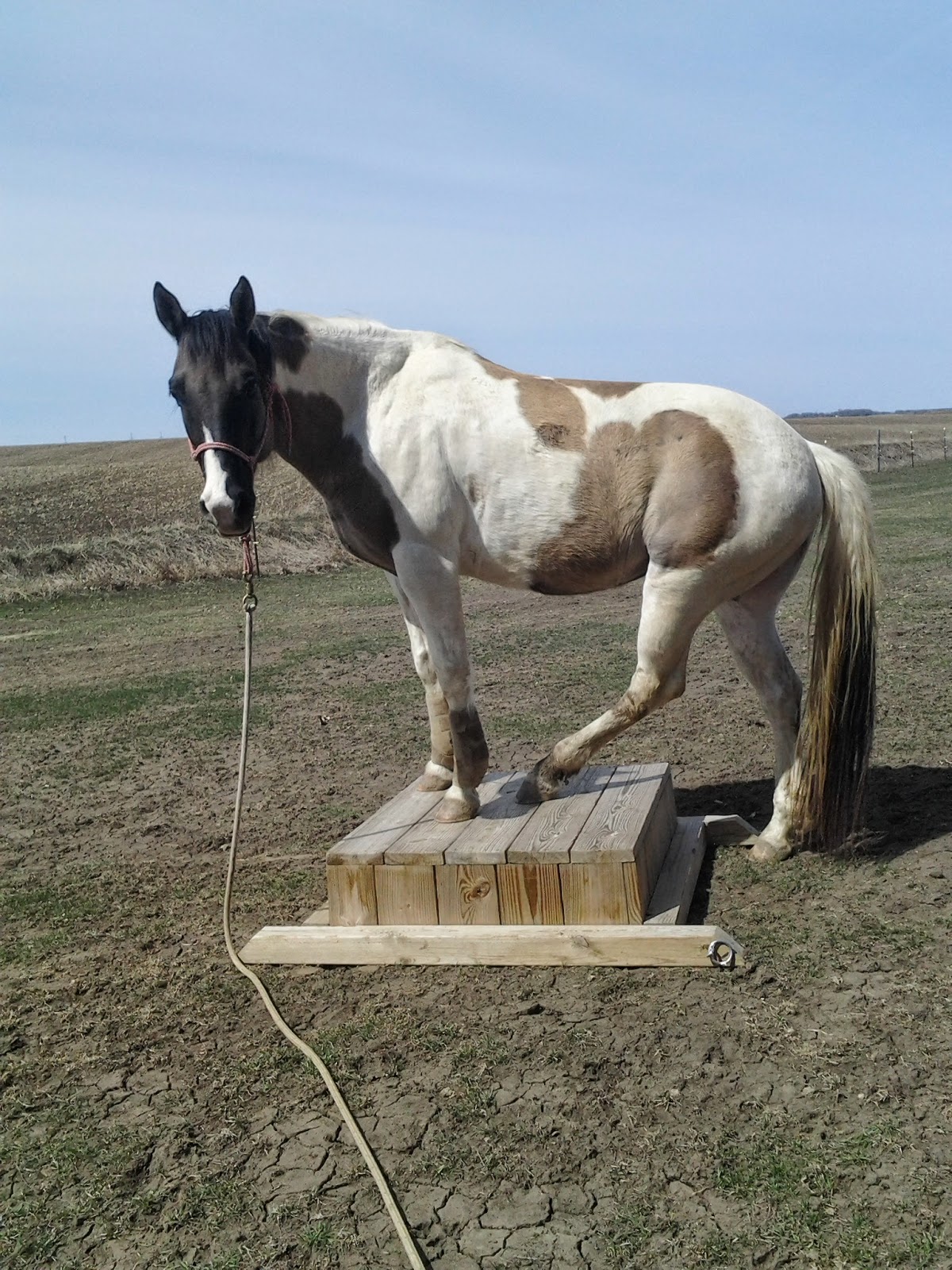 And of course this! This is Lily. She loves these games! 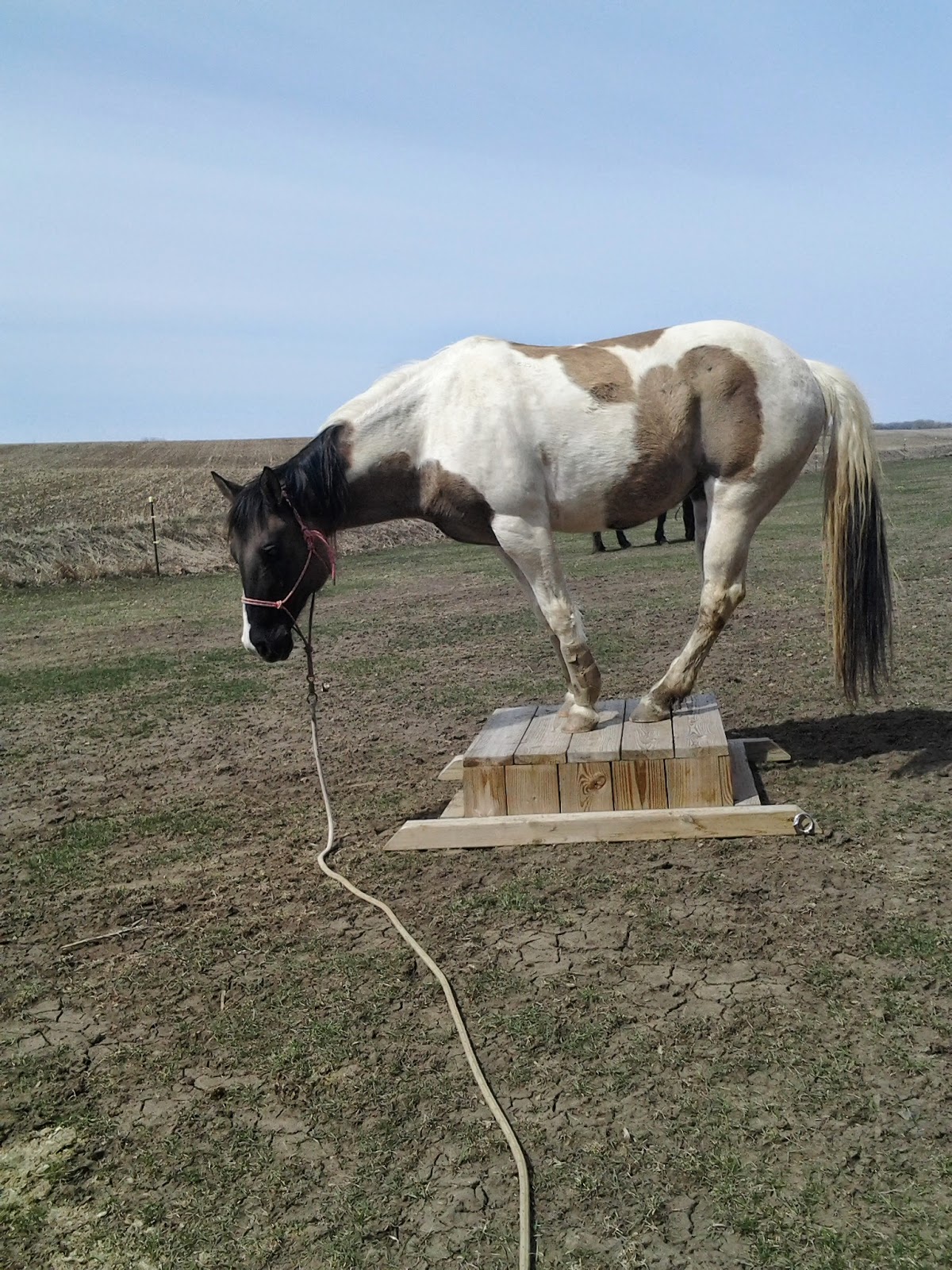 And if you want to ride, you can do that too.
Here is Shadow, who is just starting his riding career. He's doing great! 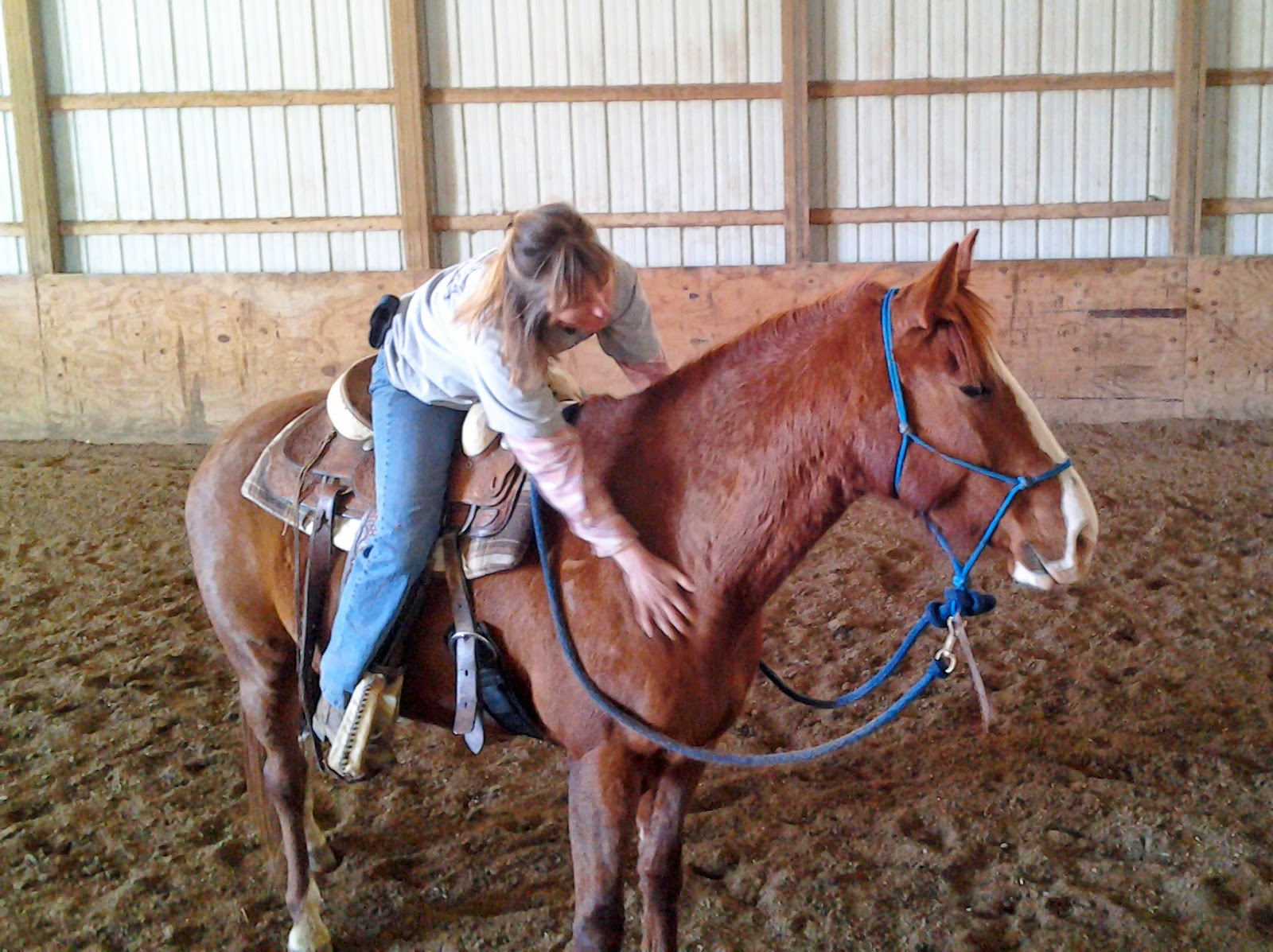 Maybe you will even advance to bridleless riding. This is Flicka. She is not a rescue horse. She lived here before the rescues starting arriving. Flicka is 20 years young now, and she has helped a lot of people find their confidence in riding. 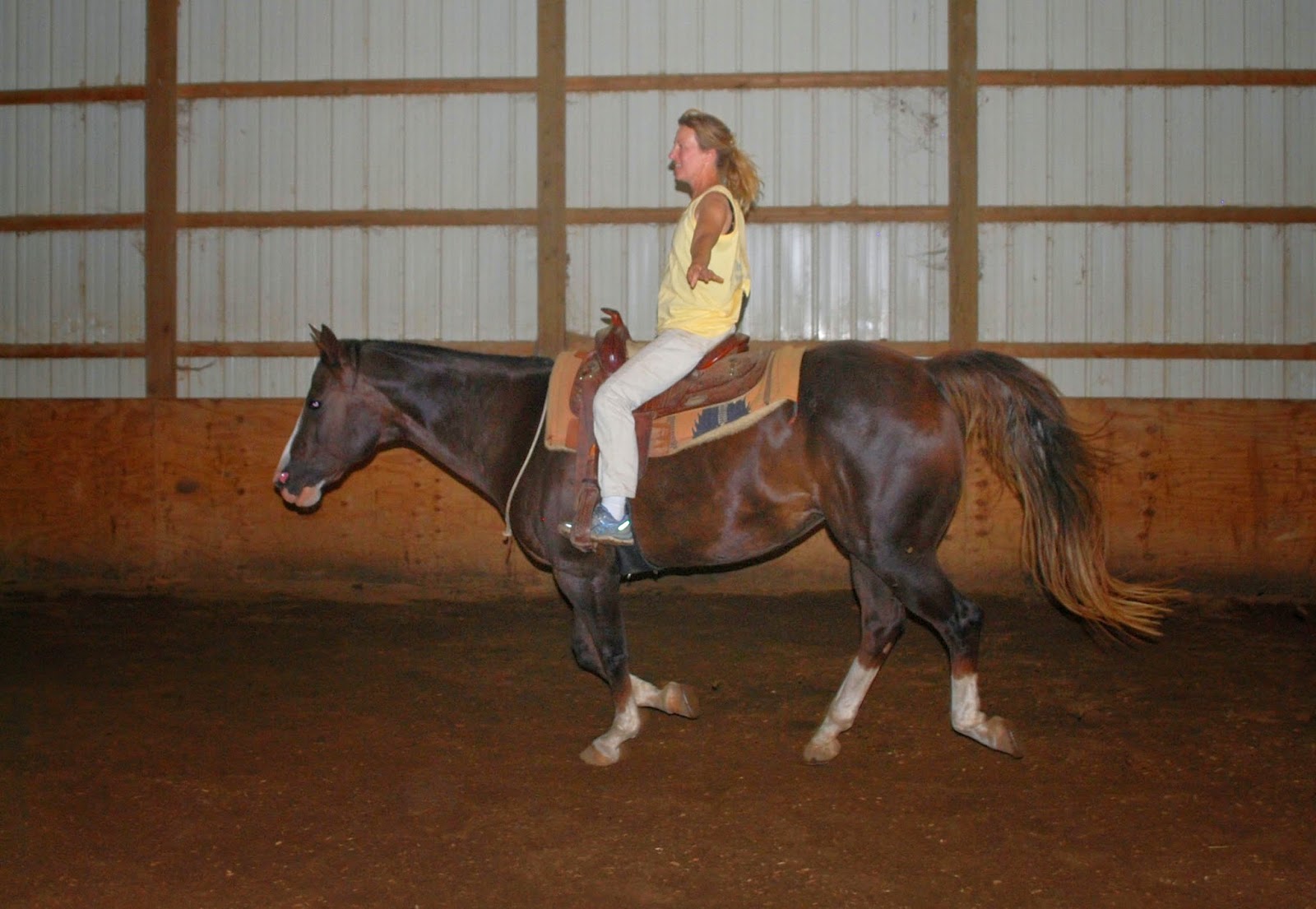 Would you like to be in AWE? In our horsemanship program?
Today is the best day to get started. Call us. 359-0961.
Posted by gentlereins at 8:39 PM

31st reason to be in AWE - pretty shirts!

Find our DoubleHP logo shirts in our online Zazzle store. If you have a special request for colors on shirt or image, let us know. On most of the products, you can change the shirt sizes, styles, colors, etc. just let us know if you need help ordering.
http://www.zazzle.com/doublehp_be_in_awe_shirt_gold_text-235557843646533965 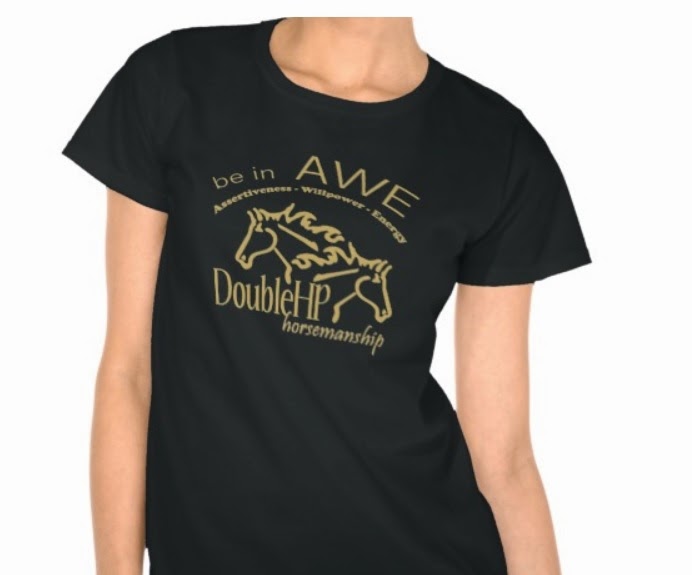 Posted by gentlereins at 9:56 AM

Labels: be in AWE, ShopDoubleHP 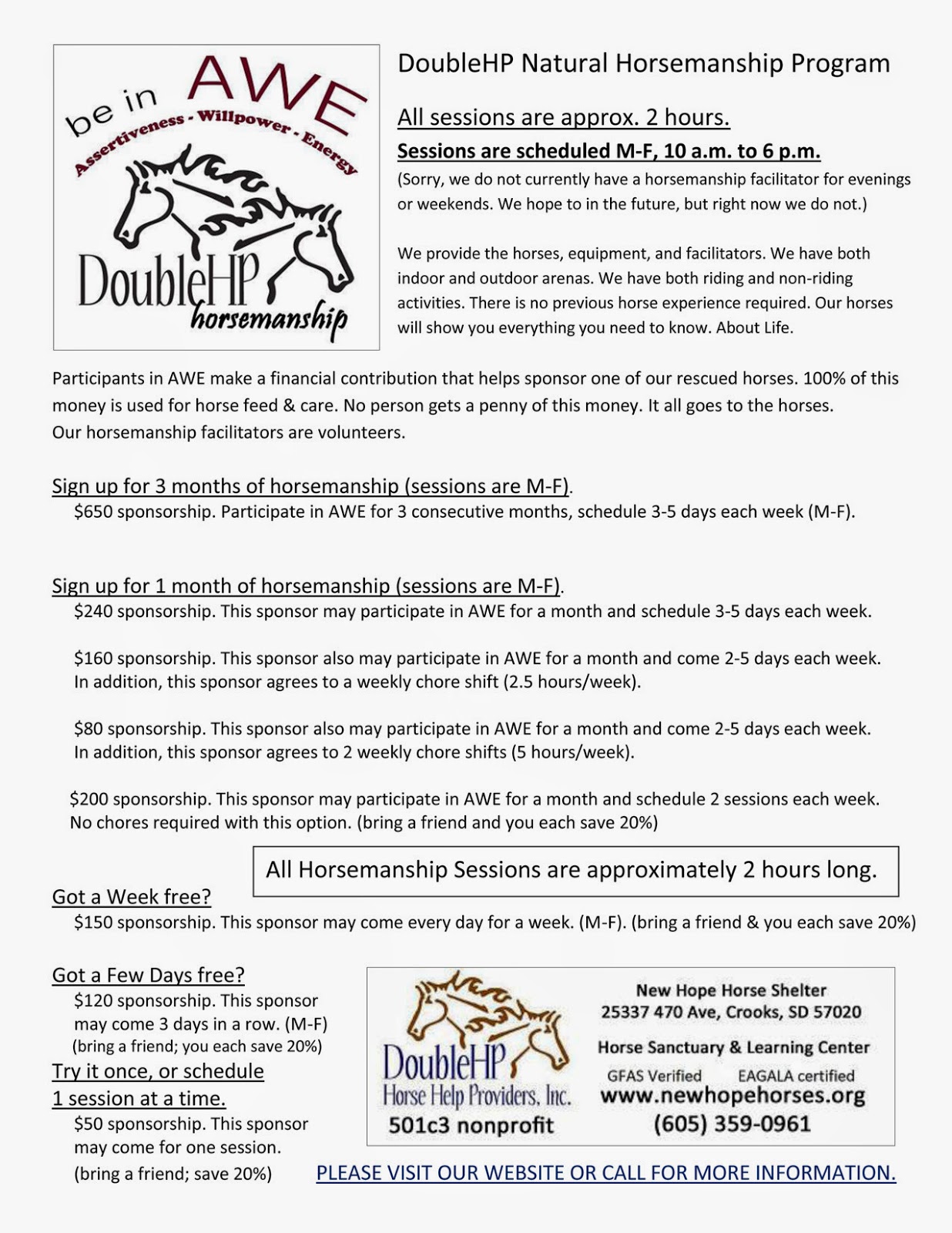 Posted by gentlereins at 1:16 PM

Labels: be in AWE

Here is our new brochure inviting and introducing Mental Health Professionals to consider our equine assisted learning/therapy (EAGALA) program for some of their clients. The Horses can almost always help figure things out. 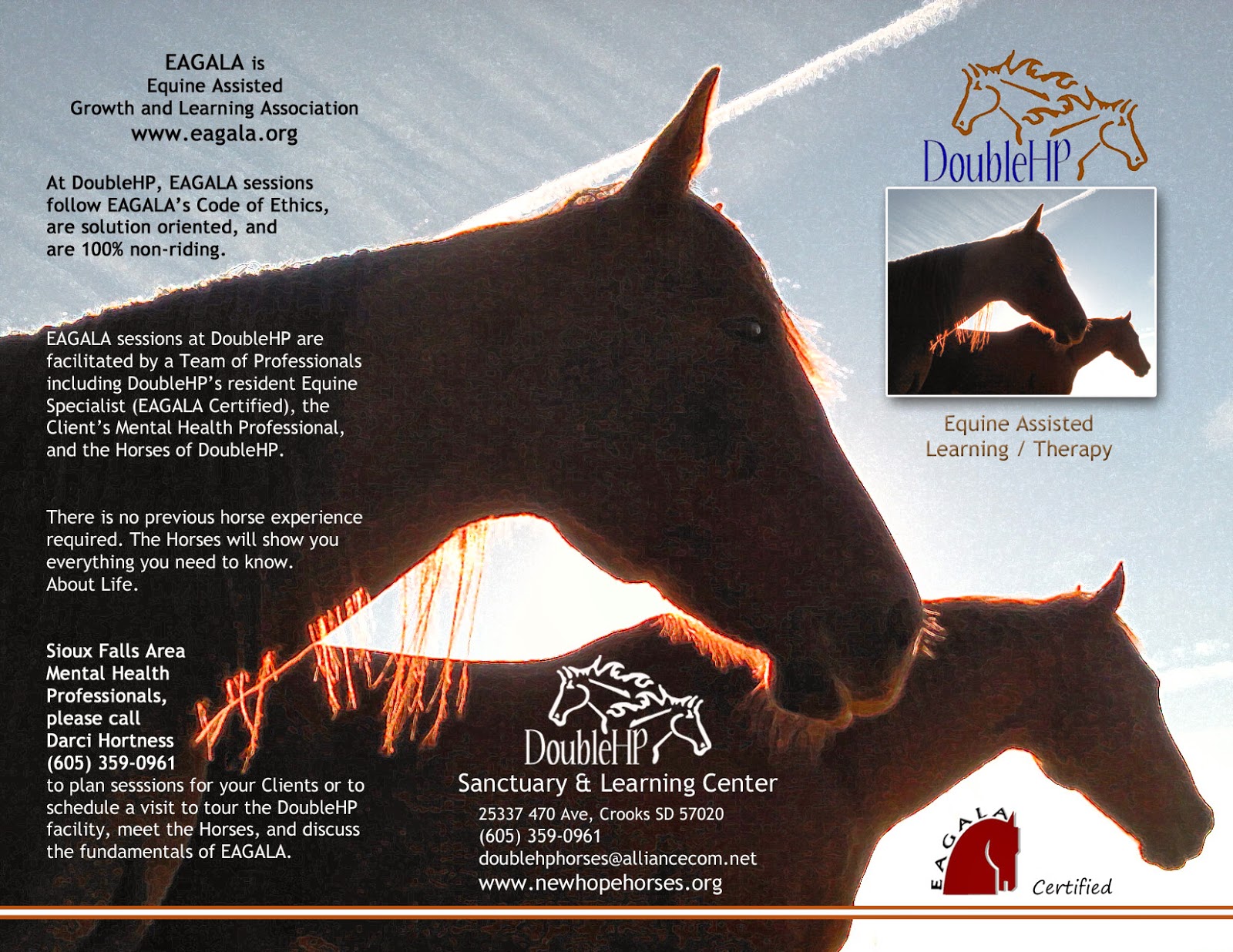 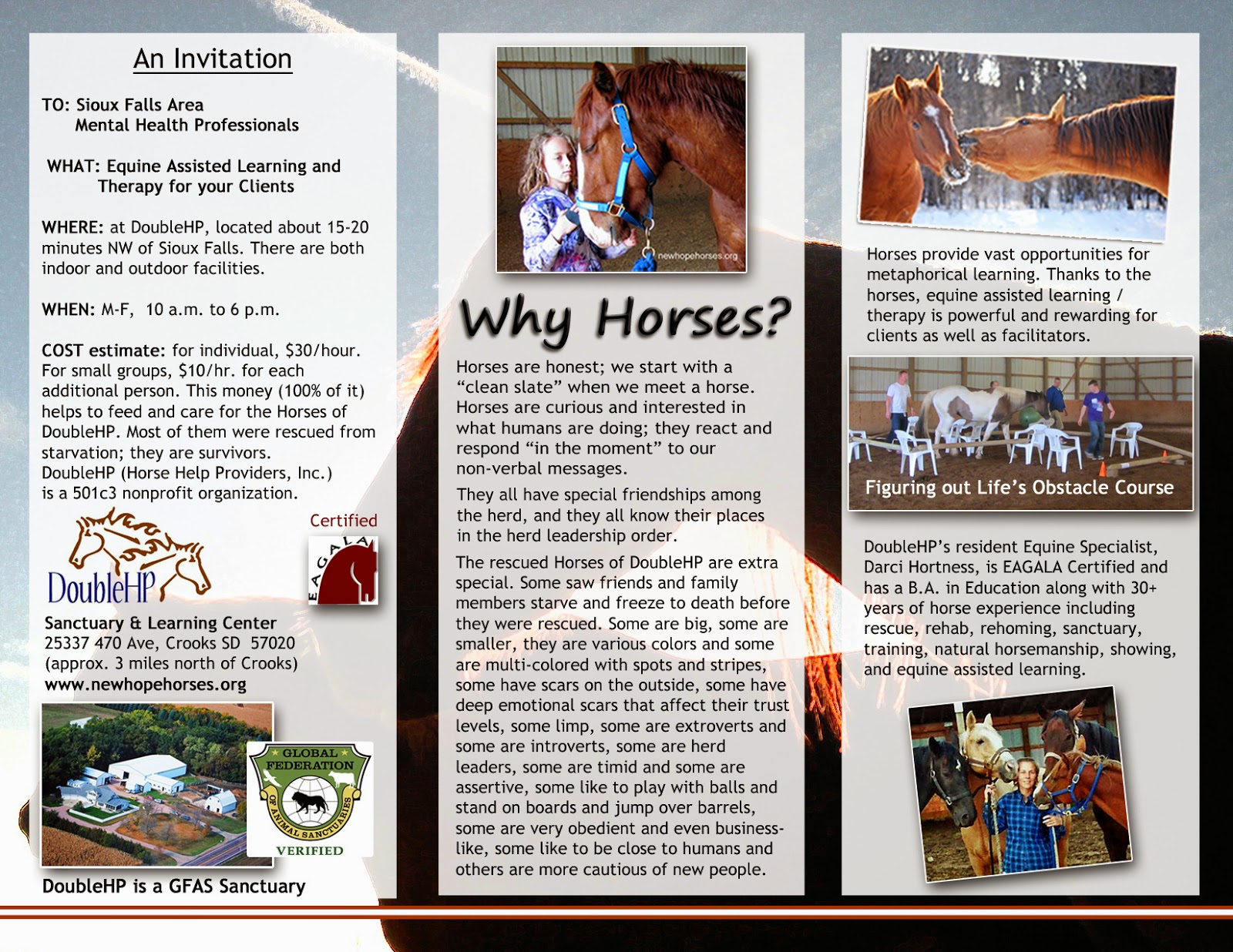 Posted by gentlereins at 9:42 AM