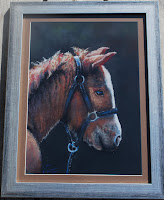 Today, something happy for you. In line with our mission to Celebrate the Beauty and the Honesty of the Horse. The original painting by Lisa Madsen, artist from Baltic SD, donated to us as a fundraiser. It went to a wonderful new home. It went home with Pam Lostroh. Our little colt Hero (Hiroki) was born at Pam's house about 2 and a half years ago! Thanks Lisa and Pam!

The quilt that was made and donated by Karlie and Denise Kirkpatrick was purchased by a guy from Watertown SD. We are working on pick-up/shipping arrangements. I will get some pictures of it before it goes off to its new home.
Posted by gentlereins at 10:41 AM

update (not good) in Aspen's story

Today I was told that possibly 9 or 10 horses have now died since this past winter on the property where I found Aspen. Three died just this past Sunday, March 21. One was the young draft horse that I kept asking about because he was so thin and I wanted to help him so much. Another one died about a week and a half ago. These horses died due to "accidents."
The other 6 included Aspen, the other 2 dead babies I saw and apparantly others that I was told were covered up in the snow.
I also learned the name of the person who owned Aspen and the other babies who died. He works at Kramers salebarn. I also do not believe he has been served papers.

Meanwhile, not far away, just in the last few days, in Union County, cattle were seized from a place because they were malnourished and 13 were dead. There is already a news story about this including the guy's name, and already mention of charges of inhumane treatment.
Posted by gentlereins at 11:12 PM 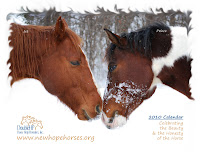 this is a link to our new huge online calendar now available for sale online at Zazzle. I got mine in the mail Friday and it is beautiful and excellent quality. We'll have one at the Horse Fair next weekend. For as little as $10 you may become a horse sponsor. We'll add your name, website address, etc., to the calendar for the whole world to see! If you want to sponsor a particular horse for a particular month, it's $200. We can add some special info about you or your family, horse, pet, etc., could even put a picture of you on there if you want! Right now the calendar goes from March to Dec. but we can add and subtract months as we go. More about this later. but those are the basics for now, to get us started.
Posted by gentlereins at 2:36 PM

link to PDF for our Horse Fair brochure 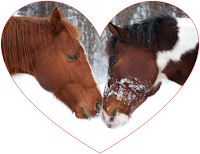 link to our brochure to print and hand out at the Horse Fair in Sioux Falls March 19-21. This is a PDF format.
http://docs.google.com/fileview?id=0B_mCRDlrVYHYY2M3NjM0MmQtOTVjYi00ZWQ4LWI0OTMtMTViOWY3NWRhNTFj&hl=en
Posted by gentlereins at 2:31 PM