We, the Horses
We Remember 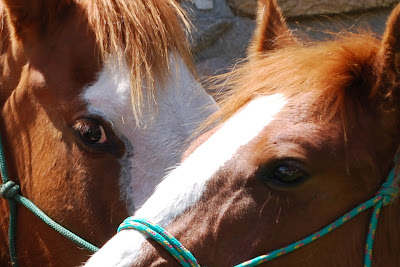 Posted by gentlereins at 9:47 PM

Permanent Part-time year-round employment helping with horse chores at New Hope Horse Shelter/DoubleHP.
Cleaning stalls and pens and other horse-related responsibilities.
Probably 6-15 hours each week, but any days are possible. We prefer a regular weekly schedule (same day(s) & hours each week). Each shift/day approx. 2-4 hours and may begin anywhere from 8 a.m. to 6 p.m.
Specific responsibilities will depend on your horse experience/skills. If you haven’t been around them much, you won’t work directly with them unsupervised much at first. If you have a lot of horse handling experience, you may also do things like feeding, putting horses in stalls at grain time, etc.
Hourly wage usually starts around $7.50 and increases when you become a reliable employee who can work unsupervised and alone with very few requests for schedule changes.
It works best if you live not too far away (we are 3 miles north of Crooks SD), can drive, have a reliable vehicle and can make it to work during the winter months too.
You do need to be in good health as this is not a sit-down type job. You will be lifting a few hay bales onto a trailer/cart if you are doing feeding, and you will be pushing & dumping wheelbarrels and other normal horse-related chores like that. And you will be working around some dust, manure, mud, etc. Some work is in the barn, some is outside.

Horse Help Providers, Inc. (DoubleHP) is a 501c3 nonprofit organization for the prevention of cruelty to animals.

We do not pay any administrative salaries. We pay a couple of PT chore helpers; everyone else is a Volunteer.

If you might be interested in this PT job, please call 359-0961 or email doublehphorses@alliancecom.net.
Thanks!
Posted by gentlereins at 2:21 PM

We, the Horses
We Forgive 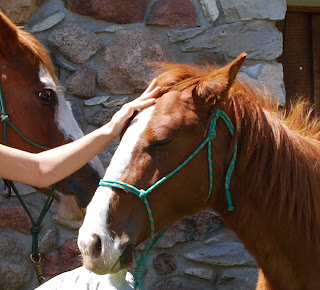 Posted by gentlereins at 2:18 PM

I used to do a thing called Irritating Owner Calls. I still get these calls but not as often. Because I usually end up telling the owner the truth. Making them fess up to reality. Which is not what they expect when they call a horse rescue. I try really hard not to completely blow them off, because I still do want to try to help the horses they are calling about. But I do make sure I make some important points during our conversation.
A long time ago I realized that our small organization can only help a few horses at a time. Yet there are so many out there that have been labeled "useless" by their owners. It doesn't do horses in general any good to pretend there is nothing wrong with these situations, situations like the one I was called about just a few minutes ago. Indeed, this situation alone, the call I got today, sums up the majority of what is wrong with the horse industry today. And sometimes, by pointing out the truth, another human heart and mind is reached.
Was a human heart and mind reached in this case? Oh it was reached alright. Will it change the way this horse owner thinks? dunno. But I will not go merrily along pretending I think this is ok.

The call, from Joann in South Dakota. (605) 832-3571 or 351-7686. Joann gave me permission to post her name and numbers and information I obtained during our phone talk. In hopes there might be someone out there who wants her horses.

First there was a message on my phone. Joanne left her numbers and said she has too many horses and these 2 in particular need to go. The message says she has a couple of horses she needs to get rid of, they have no grass and out of hay and too many horses.
the first mare she said she bought a few years ago at a sale and was obviously buted up when she bought her because soon after she turned up lame. But she had been to NFR twice and is just a sweetheart. Not enough hay, not enough room, this horse is absolutely useless and hubby says to take her to a sale but Joann knows the horse will end up in pet food. That's what Joann said in her message.
The other horse she needs to "get rid of" is a 3 year old filly who had West NIile Virus and is a little goofy in the back end but the vet said someone could probably use her for trailriding but could never be used for breeding. (so now that makes her useless too? what? what's wrong with trailriding?)
So anyway at the end of the message she's wondering if we can find homes for these nice horses or if she should just take them to a sale.
I called her back.
Asked her how many horses she has. 22. Used to have more. but she has got rid of some. bought mares and a stallion a while back and a trainer was supposed to get them trained and they would sell them and make money on them. But the trainer didn't do his job. Oh, it's the trainer's fault. I get it.
I asked her if she has foals this year. Yup.
Asked her if she'll have foals next year. Probably, she said.
And I said, "but I thought you said you have too many horses."
Then I asked her how much money she would get if she sold the foals. She said $500 to $700. I doubted that, but I didn't ask about pedigrees or show records or anything. or maybe she meant that total, if she sold them all. Not each.
Instead I asked her how much it costs her to care for a mare for a year.
And you know what she said!
"Well I have my own grass and hay so I don't have to buy that."

So I as nicely as I could reminded her that the reason she called is to say that she doesn't have any pasture or hay. And added that I'm sure she does deworming and vaccinations and ultrasounds if she's breeding valuable horses, etc., so where's the profit?

and guess what she said then!
well I guess the profit is that it makes me happy and I enjoy it.

And then I went into the "this is exactly what is wrong with the horse breeding business"
too many mares bred.
and then I knew what was coming from Joann. Well I can tell you what's really happened to the horse industry. (Oh really? This right here isn't proof enough?) Don't worry, we did not get into a discussion about slaughter. doesn't do a whole lot of good in these cases.

(In business thinking, it goes like this: Overproduction, supply way way way higher than demand, value per item goes way down because the supply is so great. In no other industry would the manufacturer continue to increase the supply when there already is no profit. Only in the horse breeding industry. And then blame it on everything else. the weather, the trainer, the damn animal rights activists.)

I had explained early on that our org. doesn't have funding or anything to run around picking up horses that already have homes, that we are here primarily for starvation cases. So she already knew we weren't going to come and get them.
but in the end I did ask for permission to pass the info. on to other groups in the hopes that maybe the timing would be right and maybe some nice person out there would be able to give these 2 mares a home.

So please feel free to call Joann if you would like to give her horses a home.
Posted by gentlereins at 10:16 AM

Rocky and Roman both have a job offer to go live with Wendy and Matt and Stormy out in the Black Hills.
Wendy is certified in EAGALA and would like to try out Rocky and Roman for Equine Assisted Learning sessions.
Wendy adopted Stormy from us many years ago. He is retired from trail riding now, so Wendy is going to try Rocky as her riding horse this summer. Her husband rides Jim, but right now Wendy is without a riding horse.
So the plan is that in early June Wendy will come and get Rocky and Roman, at least for the summer.
Rocky may come back here later, but we are hoping that Roman will work out for Wendy on a permanent basis.
Posted by gentlereins at 12:38 PM

Horsemanship To Live By