after the snowing and blowing yesterday and last night, a pretty calm morning here. Very comfortable for breakfast outside. except for Baylee and Princess who cannot handle hard, frozen, uneven ground. They get to stay in the barn area in their big in/out stalls/pens. All 17 horses are in these photos, some more than once of course. and some more visible than others. They were all in the barns last night but fresh air and exercise and outside is good for all of us. 2 leggeds and 4 leggeds. 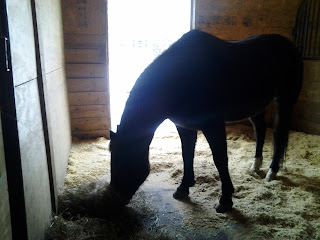 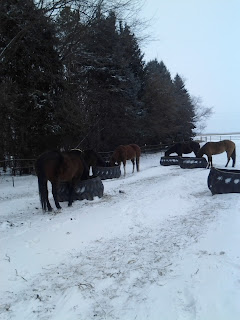 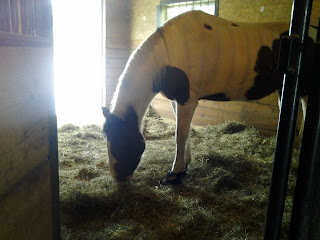 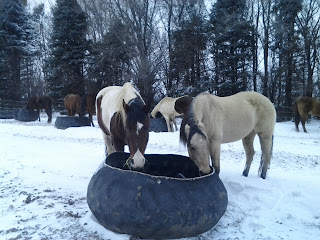 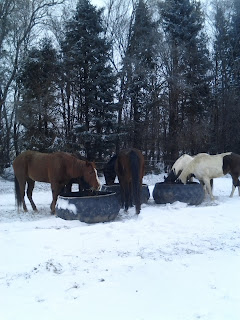 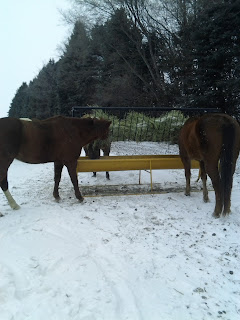 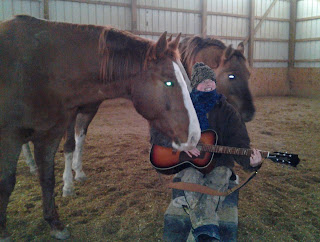 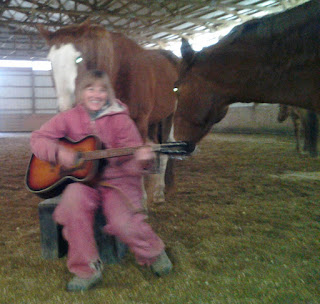 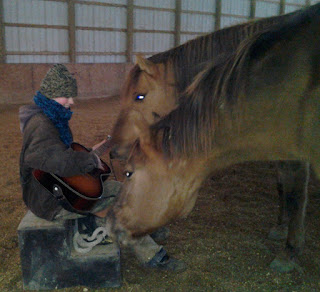 Salebarn, Slaughter, Starvation -- those should not be options for neglected horses. What about enforcement of laws!!!

Those of you who have been with me on this horse welfare journey know some about our accomplishments and ongoing disappointments regarding the way horse neglect is handled in our State. Well, in most counties that is.
Some of our (me and a few within our organization who have helped) greatest accomplishments have been to help keep funding for horse slaughter plant / feasibility study out of our state.
And bringing together for meetings our county and state officials, law enforcement, veterinarians, for meetings in Sioux Falls to try to organize a Sioux Falls Area Horse Welfare Committee. We had good meetings, but in the end everyone except a couple of us wanted to handle horse neglect cases the way most counties do: call the state vet, no prosecution, send horses to feedlot, salebarn & slaughter.  that's what's easiest.  At that time, I disbanded the group and informed all of the officials that our government does not have to help people get their starving horses to the slaughterplant.  Horse owners can do that on their own. Talk about a waste of government resources.  So, I have tried.  Have you???

here is an update on how I feel about the ISPMB and Karen Sussman. And the way the county and state officials have handled this situation. Once again, treating the horses like the offenders.


Here is an update on my thoughts about the ISPMB and Karen Sussman's criminal actions regarding neglect of her 800 and some horses near Lantry, SD.  I'm not going to go through the whole depressing thing.  you can do a simple internet search and find it all.


here is a link to court documents that is very helpful though.  Especially the Veterinary report at the end, which clearly shows that several types of neglect is definitely going on here.


Karen Sussman is responsible for the suffering these horses have gone through.


There have been people and animal welfare groups trying to help; thanks to those.


But once again, as it often goes in South Dakota, the county and state officials did not do the right thing. Oh they did the right thing for humans.  No charges whatsoever.  and just view the horses as money.  Treat the horses as the offenders, not the victims.  And protect the horse owner. This is typical in South Dakota.  Not in all counties, but in many counties this is how it goes in horse cases.


If you do an internet search you will no doubt find comments, etc., from lots of folks thanking the county officials for doing such a good job and saying they have no choice, they have to send the horses to a salebarn.  You need to know this is not true.  These horses were impounded.  The SD Animal Industry Board was involved, and so were the counties.


You will also find a lot of comments like this:  well, if the only choices are starvation or slaughter, I choose slaughter.  Weak, thoughtless humans. what kind of choices are those?  What about the enforcement of the laws we have written.  How's that for a choice? Maybe these situations wouldn't keep happening if the laws would be enforced.


anyway, I will never choose between slaughter and starvation.  I will never believe or state those are the only 2 options.  That is giving up. That is giving in.  That is living in a cave, and thinking that just because this is the way it's always been done it's the way it should still be done.  Doing the right thing can be hard, exhausting, time consuming.  But once it's done it makes the future better and easier to handle.  It takes great leaders to make these changes.  Evidently our state does not yet have those leaders.


Take a look at some of these laws we have written.  There were many options the officials could have gone with.  They certainly could have charged Sussman like they should have.  But look at all of these other options they could have chosen for the horses:


40-1-34.   Disposition of impounded animals. An animal impounded under this chapter shall, within reasonable time at the direction of the board, any agent or officer of a humane society, or any peace officer be disposed of by:


(1): returning to the owner or caretaker;


(2) transferring ownership to a humane society ...


(5) transferring ownership to a suitable caretaker or facility . . .


(6) any other disposition as determined by the board, any agent or officer of a humane society, or any peace officer in accordance with rules promulgated pursuant to 40-1-25

And then there is this one:


40-1-35.   Contract to enforce livestock provisions. The board may contract with a humane society incorporated pursuant to chapter 40-2 to enforce the provisions of this chapter concerning cattle, horses, sheep, swine, and other livestock.

Lots and lots of options.


So please don't believe for one second that "salebarn" was the only option.


What is happening is the horses are standing there eating hay which, of course is good, but they are getting fattened up for market.  There will be killbuyers present at a public auction.  Everyone knows it.  The officials know it.  Everyone knows it.  This did not have to happen this way.  Except for human greed and lack of willpower to do the right thing.

Geez, at least they could have charged her with neglect.

Here are a few notes from the court documents:


is  the  ANIMAL WELFARE INVESTIGATION  REPORT  of  Dr.  Marc  Hammrich, DVM,  of  the  South  Dakota  Animal Industry  Board,


AIso observed  was a burial  pit that  contained  25  carcasses.  These  were  in  various  stages of decomposition  . . .Proper  carcass  disposal  methods were not  being  followed  and  Ms.  Sussman  was advised  of this.  (could have charged her with that one too)


According  to  SDCL  40-l-2.3,  neglect  is  defined  as the  failure  to  provide  food,  water, protection  from  the  elements,  adequate  sanitation  adequate  facilities  or  care  generally considered  to  be standard  and  accepted  for  an  animal' s  health  and  well  being.. Many criteria  of neglect  have  been identified.  . .


Hay  procurement  needs  to  be  completed  immediately.  Many animals  are  not  receiving adequate  hoofcare.  Ownership  does  not  appear  to  have  the  means,  money,  labor,  and facilities  to  support  and  manage  a population of animals  this  size  and  does  not  appear  to have  adequate  plans to  assure  the  future  of this  herd,  Based  on  my findings  as  outlined in  this  report,  it  is  my determination  that  animal  neglect is  present  at this  facility.


Let's be clear.  What is needed, what's always been needed in these cases, is enforcement of the laws we have written.  And doing right for the horses, the victims.  Charge the offenders. Prosecute.  Include in the sentencing "no more breeding or no more ownership of horses."  It has been in some counties I have worked with.  No there were not 800 horses involved.  But that's the thing.  You handle it the right way in the beginning and it wont blow out of control like this.


I will keep advocating for horse welfare and enforcement of laws with the victims, the horses, in mind.  I will not settle for the salebarn and slaughter being the answer.  If more of us would speak up that way, some day, it will change.  Probably not in my lifetime.  I know that.  But I will be able to rest in peace, knowing that I never gave up and I never gave in.
Posted by gentlereins at 11:28 AM

our 2017 calendar for sale now in our Zazzle store.

Our beautiful 2017 calendar, featuring photos of our sanctuary horses and some of the people who love them and help care for them. 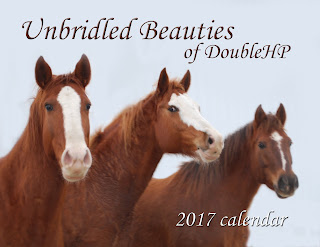 that's the front photo.  when you go to our Zazzle store to order, you will be able to view each page and the back.

Summary of our Organization & Programs, through the years (2001-present)

Here are the pages to our new brochure/booklet. It's a nice summary of our organization and programs.  You will find more information on this web/blog.  for questions, please email doublehphorses@aol.com. 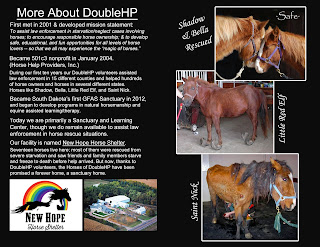 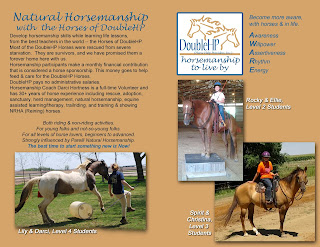 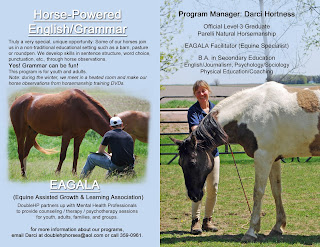 Make a Donation directly to our bank account, through Paypal

join some (more than 3,500) of our friends on facebook - New Hope Horse Shelter, where 14 of our rescued horses live.

DoubleHP Horsemanship To Live By

We do this in our horsemanship program at DoubleHP.