Usually this time of the year I can take the camera out and get some fantastic horses-in-the-snow photos.
Not this year!
Guess we're having a Brown Christmas this year, no matter how long and often we dream of a white one.
Nevertheless, out with the camera I did go.
Boooooooooring!
The horses were all napping (nestled in their beds is how the Xmas Song goes I think).
So, I decided to take some close up photos. haven't done that for a while. kind of like the action shots better. though I do like some of these close-ups I got today. I'll put a couple in here and try to add to it in the next few days. (remember the photos will enlarge when you click on them) 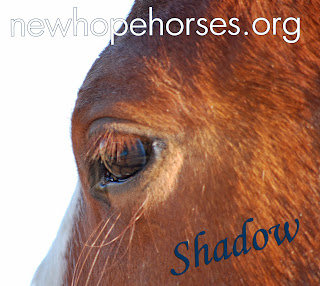 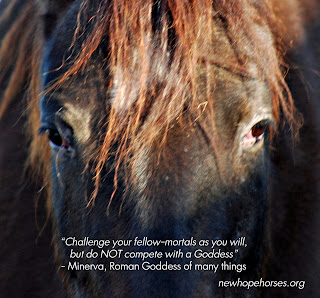 Here's the thing about our Minerva:
We rescued her from starvation as a yearling. Not long after that she and her mama Jasmine appeared as poster children for Unwanted Horses in a national "Unwanted Horse" conference in Washington, D.C., in June 2008. I suppose I somehow gave permission for the photo to be used, through a survey or membership or something. Though I don't remember specifically but I cannot say for sure that I did not either.
here's the link to the online document/presentation from this Forum.
http://www.nal.usda.gov/awic/pubs/FTAAProceedings/unwantedhorseproceedings2008.pdf

On Page 85 you will find our poster children. 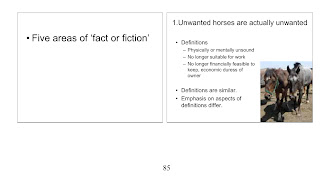 here is that photo I still have on my computer.
I took the photo, just a couple of days after we rescued this herd. 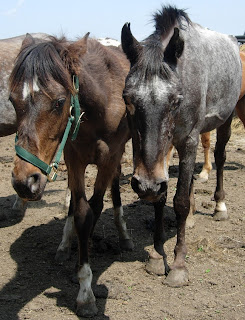 wow, they were pretty sad looking, weren't they!
I guess they really did look the part - unwanted.
funny thing is, they really weren't.
Turns out all of the horses from this herd are now excellent riding horses. Well, except for Mama Jasmine, who is now in horsey heaven. What a tough gal Jasmine was though. emaciated, broken hip, could barely walk partly due to no hoof care, her emaciated yearling Minerva right by her side and, in addition to all of this, Jasmine was 3 weeks away from giving birth to another foal, our Hero.

Because they are serioulsy neglected, does that mean necessarily that they also are unwanted?

I don't think so.
I think the term "unwanted" is unecessary.
These horses were neglected, to the point of inhumane treatment, which is a crime.
Seriously! Even in South Dakota, this is against the law.
Let's be placing the blame where it belongs: On the irresponsible owners.
"Unwanted" makes it sound as though it's the horse's fault.
But it's not! It's the owner's fault. And, in this case, as with most of them, the owner was also the breeder.
These were not "unwanted" horses.
They were neglected horses.
They were irresponsibly-bred horses.
That is human error.
Let's start putting these things in prespective.
Quit blaming it on the horses.
The fault lies with the breeder and/or owner.

In any case, we are so happy to have rescued this herd a few years ago. We answered the call for assistance from a nearby animal shelter that is no longer in existence. We were supposed to "assist" them but ended up doing the whole thing, including taking over responsibility for all expenses and placement of the horses. Fortunately, we had several other experienced horse people join us and were able to accomplish this unexpected mission.

Minerva has grown up to be a fantastic riding horse, a natural "Western Pleasure" prospect who also has some pretty great "Reining Horse" moves. Don't laugh at me. I know some things about Reining, and I have had two trainers confirm this for me. You bet she's a poster child.
But it's not for Unwanted Horses anymore.
It's for Warrior Horse Goddesses.