Show Some Love for Lovely Lily - February is her rescue anniversary!

We rescued Lily on Feb. 7, 2008.  This month we are celebrating her rescue and her life.  We were called to a different county for this rescue.  It was just Lily and her friend.  Only problem -- her friend had already died.  So Lily was standing out in a  field with no food, no water, no shelter.  Only a dead friend.  And it was cold.  Kind of like this February.

We picked up Lily at the humane society in this county.  The people there were very nice and one of them did know quite a bit about horses.  Lily was severely dehydrated and emaciated.  Her halter was growing into her head.  She had rain rot, lice, terribly neglected hooves, and I remember thinking she looked like a shriveled up Shetland pony.  But really she was a 4 year old Paint horse. 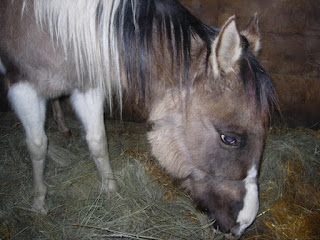 We waited to transport Lily until after she had eaten some hay and taken a drink of water.  Then we put two blankets on her and brought her back to one of our foster homes that had a double-sized stall where Lily could live for a couple of months. It was still Winter.

The very next day we had our Vet examine Lily.  Our Vet then wrote up a report for the State's Attorney, because there were charges of inhumane treatment.

Here is part of the written report:
"During the exam the horse was quiet and lethargic acting. The horse was very thin with a body score of 1 to 2 (scale 1-9). All ribs were easily palpated, back bone, withers and hips were prominent, and there was no flesh/fat anywhere on the horse's body. The horse's feet were in terrible condition. The hooves were long and underrun with several chips and cracks present in the hoof wall. 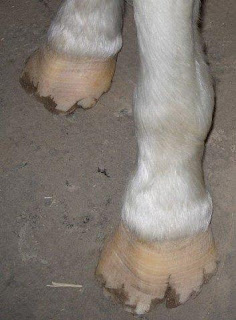 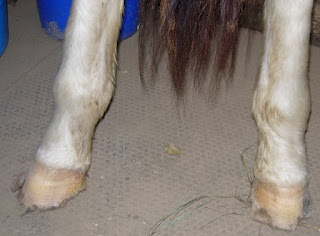 Dental exam revealed sharp enamel points on the cheek teeth with ulcers present on cheeks. Her teeth were floated that day.

She was also rectally palpated because there was a concern she could be pregnant. She was not found to be pregnant, but there were hundreds of small strongyles that covered the ob sleeve and feces after palpating. I rarely see a parasite load of this magnitude. I am more accustomed to having to float feces and look for parasite eggs. Actually having hundreds of adults following palpation represents an extraordinarily high burden of worms. I recommended beginning this horse on daily dewormer, so a slower consistent kill would be achieved, followed by an Ivermectin product in one month. In my opinion based on previous cases, I would say this horse has been neglected. She is severely underweight, has had no foot care, has had no dental care, has an extremely high parasite load and has no energy." 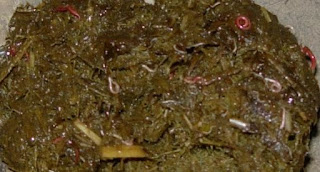 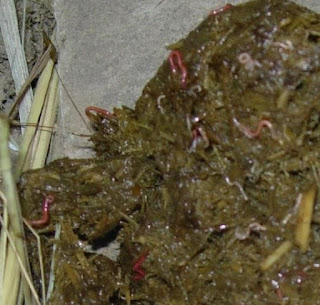 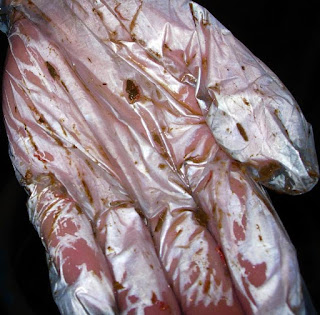 Lily was lame for quite some time.  We could not guarantee she would be a riding horse.  She has been lame on and off most of her life with us.  She does fine most of the time with front shoes.  She has done some trail riding.

But her biggest achievement is that she has graduated from Level 3 Parelli Horsemanship and has also passed Level 4 freestyle (bridleless) riding.  She is very playful, loves to play with the big green ball, jumps over barrels, self loads into the trailer, stands on the pedestal, plays at liberty, etc. 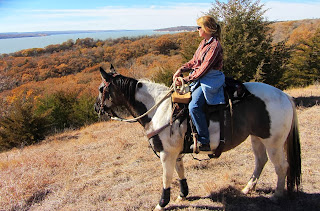 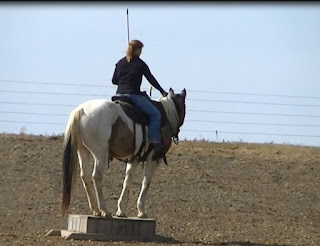 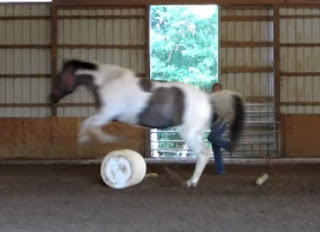 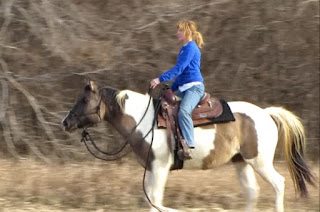 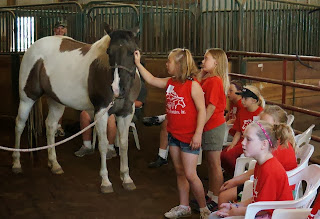 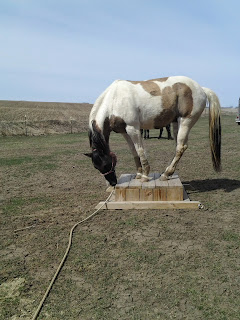 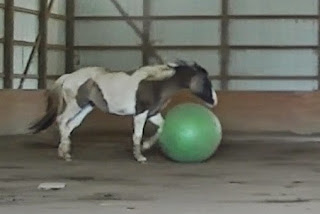 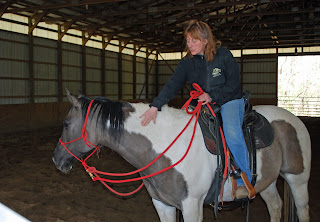 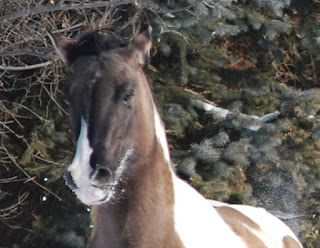 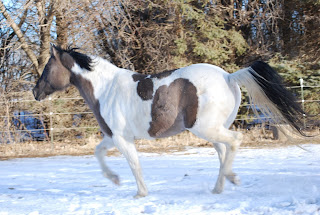 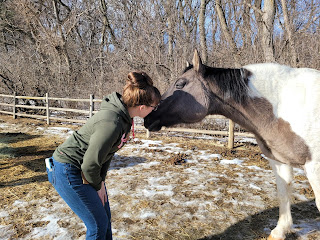 She has had colic symptoms a couple of times this Winter.  She does not handle long spurts of cold temps.  So, this month, her rescue month, she is wearing a blanket and is living in the barn.  She is very happy to be inside.  It is supposed to be 20 below zero for the next couple of nights. That is withOUT wind chill.  Lily will be very happy inside.

Last year she had more lameness issues than normal.  Our Vet did xrays and we even had a specialist look at her and do ultrasounds, etc.  It was decided to inject her hocks.  That did seem to help, and she has been sound this Winter.

Lily has a lot of years left.  She does require quite a bit of special care.  But, after what she went through, she sure does deserve the special care.

Posted by gentlereins at 7:03 PM