Princess came home from the Vet on Saturday. She is already moving better and complaining about her stall rest. Fortunately, the Vet approved this little in/out setup for Princess' recovery area. Three weeks in this little area. Could be worse though. Sometimes it HAS to be in a boxstall only. At least Princess can be in or out. 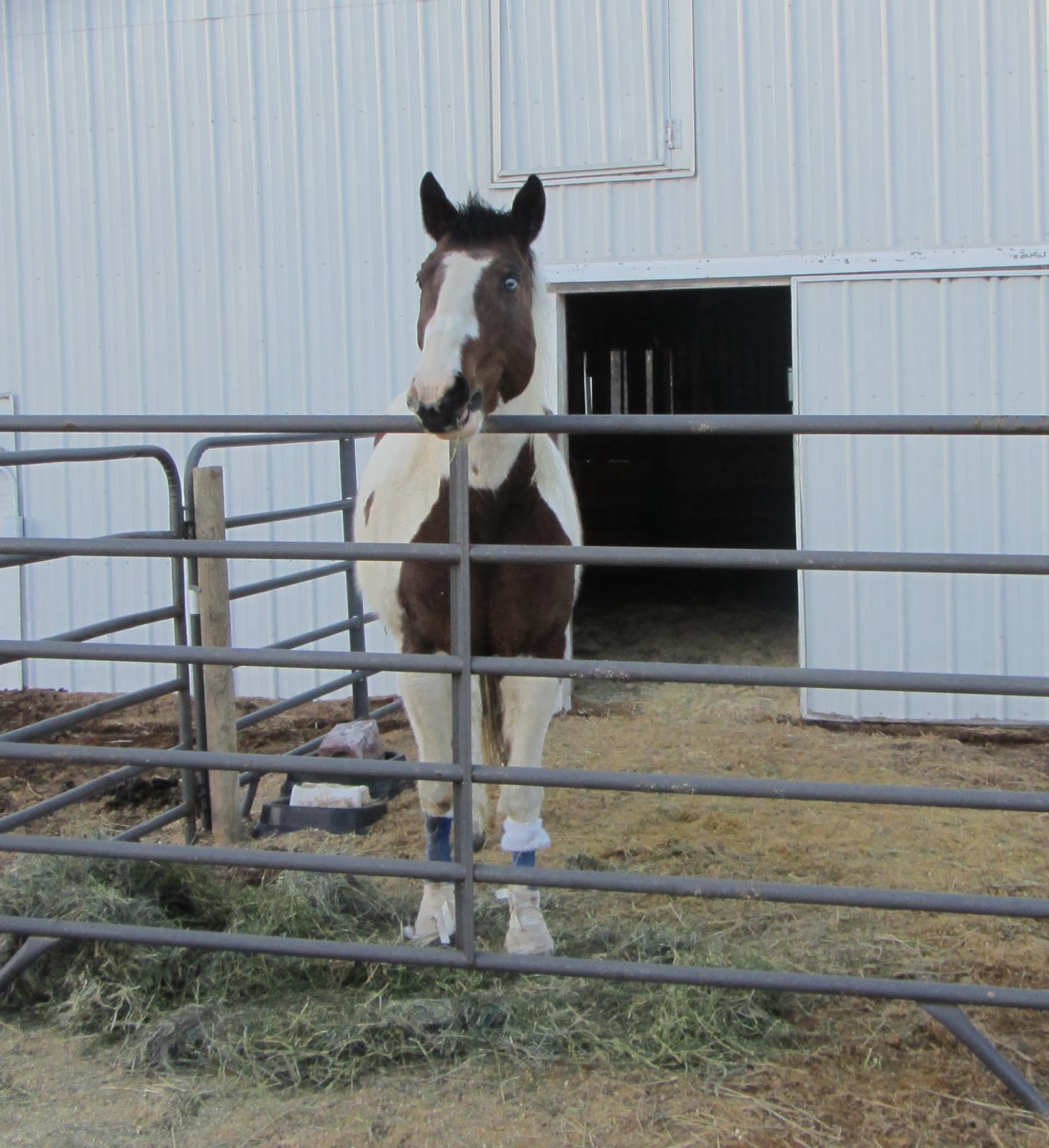 Her brother Prince comes in at night and has the stall/pen right beside her. During the day, King is her buddy. So she is never alone. 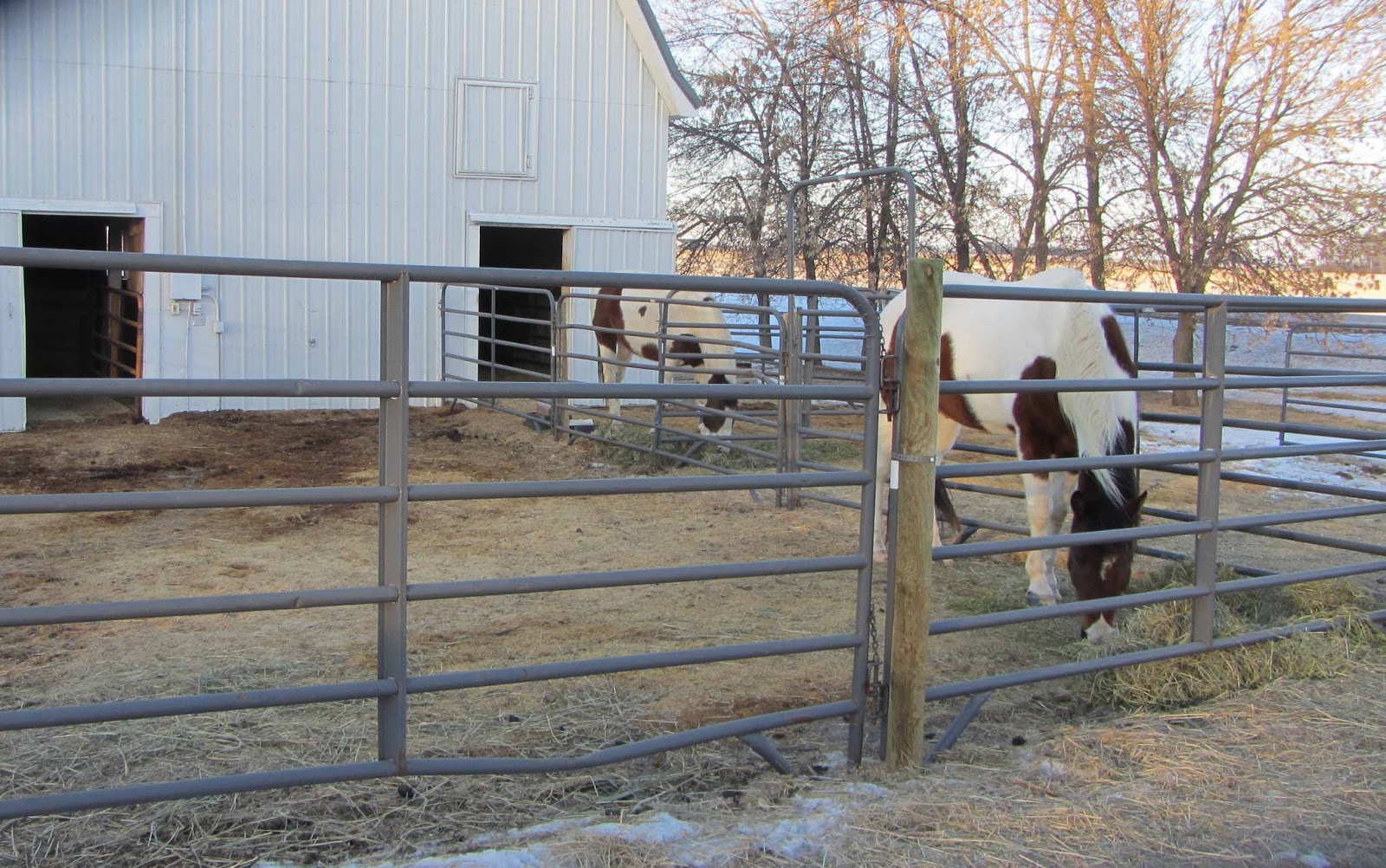 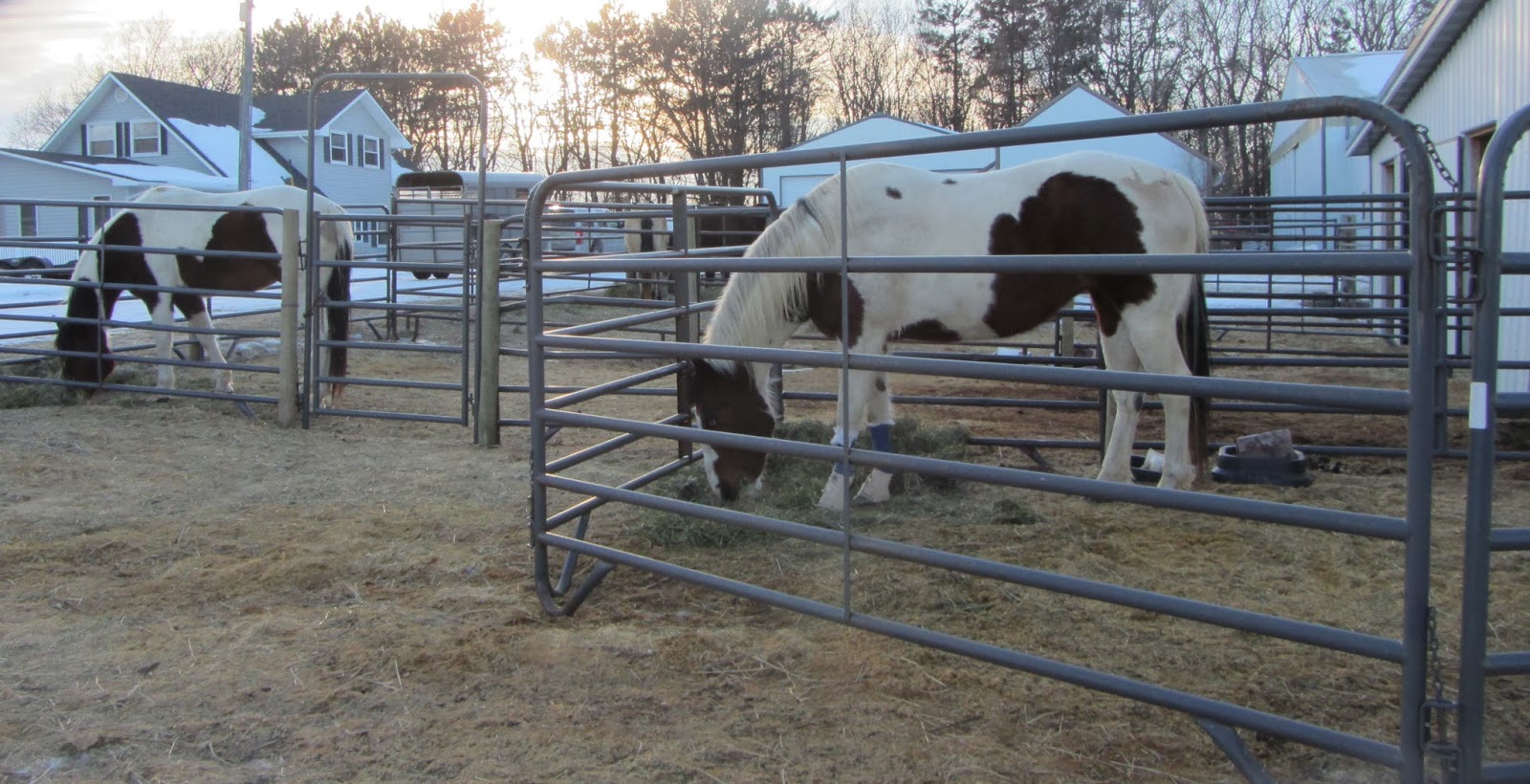 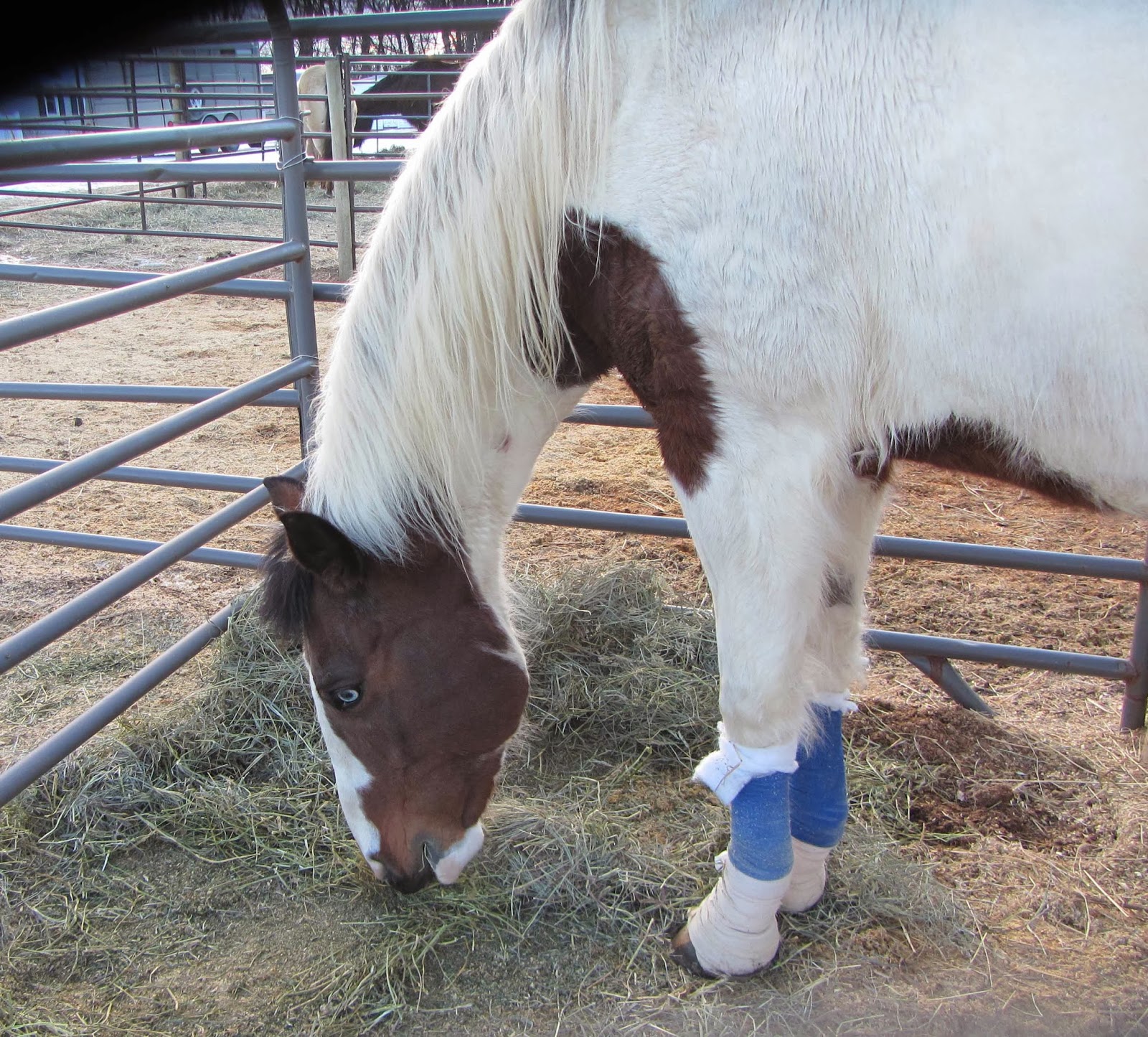 The Vet said it was a very interesting surgery. You may remember from previous posts, that Princess had this surgery about 5.5 years ago. The nerves are cut to relieve the pain in her feet from her "navicular condition." The Vet said that the nerves had grown back together and there was a big knot of nerves in both legs. The nerves don't usually grow back together like that.
I don't spose anyone would want to donate toward her surgery? Probably about $700 or so. We rescued Princess and Prince from starvation when they were youngsters. Princess was very easy to train but we haven't ridden her now for several years. Maybe we will now. We'll see how she turns out for sure in a month or two..
here is a photo of Princess and Prince, shortly after we rescued them. They were a year and  a half old and had lived in a state of starvation for this whole year and a half. No wonder their bones & joints didn't develop right. 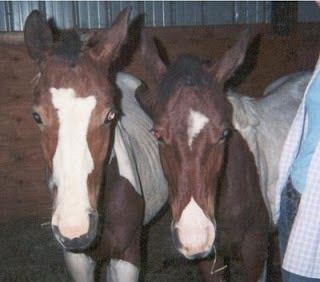 They were rescued from an out-of-control breeding program. More than 100 horses here, mares having babies in the crowded muddy pens. Most of the adults were registered, but paperwork had not been done on the babies. We did get Prince & Princess registered APHA though. At our expense.  I  question the reported numbers of horses being produced. Many breed registries say there are fewer horses being registered and so they tell us there are fewer being produced. And they don't understand why the neglect, the "unwanted" horse population continues to exist. Since all of their members/breeders are now responsible and are no longer overbreeding. The only proof I see is that more than half of our rescued babies come directly from registered breeding programs, where the adults are registered but the lazy, out-of-control breeders didn't think the babies were valuable enough to pay for the registration paperwork on the babies. Not valuable enough? Then why in the world are they breeding them! The number of foals being registered is documented. The number of foals being produced is not. So perhaps what is happening is that more unregistered foals are being produced. And that is a very bad thing, because then their value goes down even more. There are still lots of ads for young horses everywhere, "free," "first one to drive in the yard with a trailer can take 'em," a 3 year old that is "ready to halter break and castrate," "dirt cheap & registerable," etc. And lots of young horses going through the loose/slaughter horse sales. Lots and lots of young horses that never should have been bred in the first place. Now going to slaughter, only because the breeder did not get them registered , halter broke, castrated and fed properly. When the breeder does not have time & money to train them and care for them, he should not be a breeder. We thank the responsible, successful breeders for the great horses you bring into the world. The responsible, successful breeders know we are not talking about them here. They know who we are talking about.
I have yet to hear of a large-scale horse rescue where there was no breeding going on. Just sayin'
We are 501c3 as Horse Help Providers, Inc. If you would like to support an organization who advocates for humane population control as the number one priority for the big picture of improved animal welfare for dogs, cats, and horses, please consider making a donation to us. We do not celebrate kitten season. Our 17 cats here are spayed & neutered, as are our 3 Labs. We do not understand why any animal adoption center would adopt out any animals without spay/neuter/castration (for the animals that are old enough anyway). And even though some of our rescued horses are excellent riding horses who would have nice babies that would be easy to train, we have never allowed them to reproduce and have always castrated the stallions. There are still way too many horses, dogs, and cats reproducing. Because their humans WANT them to. OK, I know we are not supposed to talk about this in South Dakota. Sorry. shhhhhhhhhhhhhh.
Anyway, if you get what I'm talking about and would like to donate to an organization who is not afraid to talk about it, here's how to donate: You may send checks to DoubleHP Horses, 25337 470 Ave, Crooks SD 57020. Paypal to doublehphorses@aol.com        or use the Donate button on this webpage (up toward the top, over on the right).
All donations, every penny, goes for the feed and care of our rescued horses. No person gets a penny of this money. If you're from South Dakota, we've possibly helped officials, horses, or horse owners in your county. We've helped in lots of different counties over the years, usually with no financial help from that county. It's just the way it is in our state.  shhhhhhhhhhhhhhhh.
Posted by gentlereins at 7:15 AM